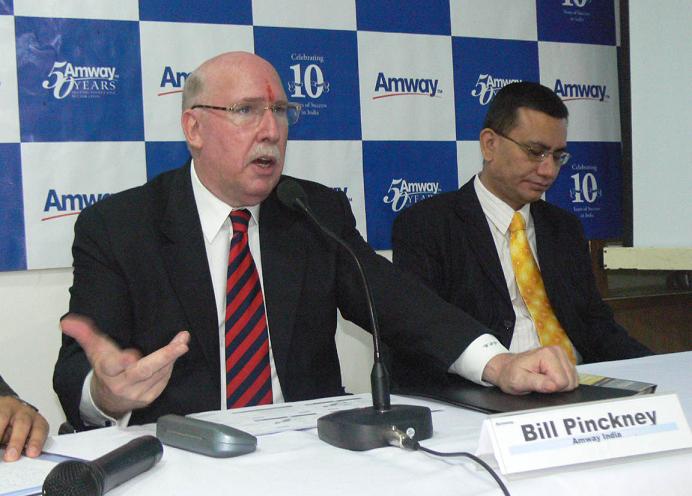 Shimla: Beating the slowdown by recording a 27 percent growth in Jan-July period, Amway India, the countryâ€™s largest direct selling FMCG company has set out a target of Rs 2500 crore sales by 2012, more than double of what it recorded in 2008.

Speaking after inaugurating a larger office here, William S Pinckney, MD & CEO of Amway India said that the vendor plant at Baddi was working to capacity, to meet growing demands for our products an additional Rs 55 crore was being spend to add 4 new production lines at the plant which would boost the production three fold.

After the additional investment a total of Rs 105 would have been made at the Baddi plant operated by Sarvotham Care, where Amway contract manufactures about 85 % of its products sold in Indian markets.

Pinckney that in 2008 the company had recorded sales of Rs 1128 crores and handed out Rs 338 crores as direct commissions to over 5 lakh Amway business owners across the country.

Last year the company had shown a growth of 40 percent and surpassed the Rs 1000 Cr sale mark for the first time, he said. Against a sale of Rs 616 crore in 2008, we have has sales of Rs 780 crore in the January-July period, this year.

Launch of a new e-commerce portal had increases sales from Rs 1 crore per month to Rs 12, said Pinckney.

Amway India is countryâ€™s leading direct selling FMCG Company which is a subsidiary of US $ 8.2 billion Amway Corporation, Ada, Michigan, and USA.

The company has invested more than Rs 151 crores in India and has 130 offices and 55 city warehouses across the country that covers over 4000 cities and towns through its distribution and home delivery network set up with the support of independent logistics partners.