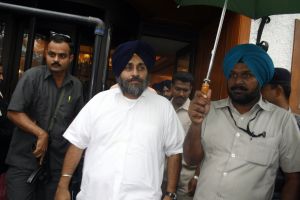 Shimla: Whereas Jaswant Singhâ€™s account of Jinnah contribution towards Indiaâ€™s freedom movement caused heartburns in BJP, sending the party into a spin after unceremoniously banishing the author, the Akali Dal on the other hand at it Shimla Vichar Baithak decided to document the party history both on film and in a book.

Party president Sukhbir Badal said that Akali Dal, which started out its political journey in the 1920â€™s, after congress is the second oldest party in the country, about many youngsters are not much aware about.

â€œThe party at its meet here decided to have a documentary film made, that would truly document the history of Akali Dal,â€ he said. It would not only record all the history, sacrifices and contributions made but would also help the younger generations to connect to their past, he added.

â€œAfter taking this decision, we will lookout for a reputed director to make the film,â€ said Badal.

Not just a film, plans are afoot to commission a book on the evolution of the party and also set up a museum in Amritsar, he added.