SJVNL, a mini-ratna government power generating company, made a breakthrough today by completing 50 % excavation of the head race tunnel for the 412 MW Rampur hydropower project being executed on Satluj River, a month ahead of schedule.

The breakthrough blast, made in the presence of HK Sharma, chairman-cum-managing director SJVNL was executed between Kajo downstream and Kunni upstream section with complete precision, said Vijay Verma, spokesman SJVNL.

A continuous stretch of 5444 meters of head race tunnel between Kajo and Kunni stands completed and besides that an additional 1904 meters of tunnelling work has been executed. Of the about 15 Kms of major tunnelling involved about 50% has been completed, said the company spokesman. 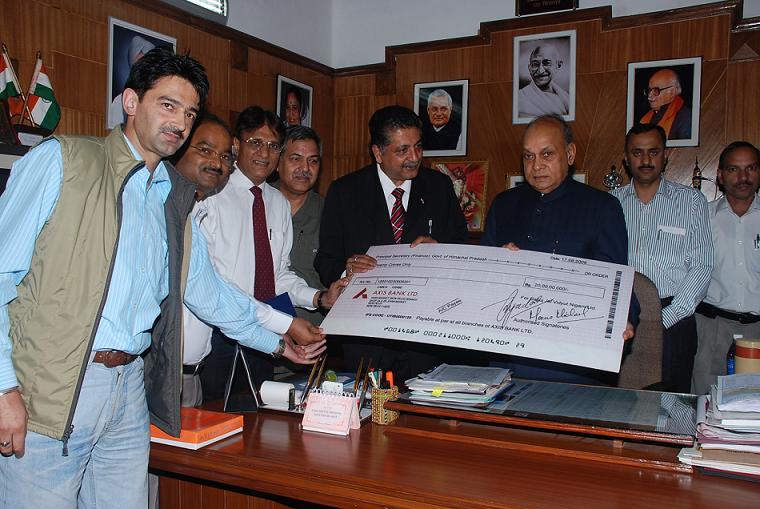 With generation at SJVNL mega Natpha-Jhakri 1500 MW project having had a problem free year, the plant is expected to achieve record generation in the current financial year and has already paid Rs 80 crore as interim dividend for 2009-10 to the promoters of the joint sector project.

As the central government holds 75 % equity a Rs 40 crore cheque was handed to union power minister Sushil Kumar Shinde on 14th August and a Rs 20 crore cheque was given to chief minister Prem Kumar Dhumal on Monday and Himachal Pradesh holds balance 25 percent share in the project.

During July, 2009 the power station had generated 1144 MU of electricity which was the highest ever monthly generation achieved at the Project.

The generation during the month was not only the highest so far but it beat the highpoint target by 118 milllion units. In June the plant generated 1069 MUs which was 82 MUs more than the target, said Sharma.

Between April and 12 August the station had recorded a total generation of 3732 MU of electiricty, which is the highest for the plant.

The Company plans an investment of Rs.23,000 crore during the next ten years. It has about 4000 MW capacity project lined up for commissioning by the year 2020 in the states of Himachal Pradesh, Uttarakhand and neighbouring countries Nepal & Bhutan.