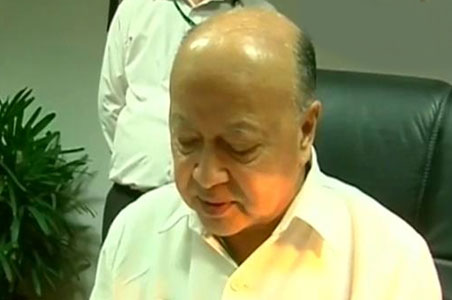 Shimla:Union steel minister Virbhadra Singh, his wife Pratibha Singh have been booked in a corruption case by Vigilance and Anti-corruption bureau, here, under Prevention of Corruption Act over voice recordings in an alleged taped telephone conversation said to be more than a decade old.

He said the case was registered over a telephone conversation recording that was made public by Vijay Singh Mankotia.

Illegal transactions of money are alleged to have been discussed in the old recorded conversation.

Sources revealed that the government was moved to act upon a case filed by SM Katwal, a former bureaucrat, before the Himachal High Court seeking registration of a criminal case in the CD that was released by former congressman Mankotia.

A vigilance inquiry was marked to ascertain the identities of the person between whom the conversation was claimed to have taken place.

The police had meticulously gone about having a voice match done at a forensic laboratory to verify the voices on the tape which pointed at Virbhadra Singh, his wife Pratibha Singh and a deceased IAS officer Mohinder Lal.

Mankotia, a political adversary of Virbhadra Singh had timed the release of the CD to a week before a crucial parliamentary by-election in May 2007, in which current chief minister Prem Kumar Dhumal was the BJP candidate. Dhumal had won the election by over 80,000 votes.

Virbhadra at the outset had denied the voice in the conversation to be his, saying that the contents of the CD were doctored.

He had even approached the High Court seeking a ban on circulation of the controversial CD.