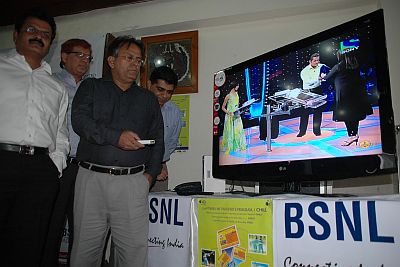 Shimla: BSNL, the largest telephone player in Himachal, added triple play service of voice, data and IPTV to its landline services after it made commercial launch of its TV on demand services, today. The public sector telephony player has tied up with Aksh Optifibre, a listed company for providing this value added service at the hill capital.

Speaking on the occasion Anil Kaushal, chief general manager BSNL said that the IPTV service would be available for broadband subscribers in Shimla for a start. The commercial launch was being made after a soft launch was made in February when the new service was put on trial with 300 subscribers, he said.

The customer availing this facility would be able to view 120 channels at nominal monthly payment. In addition latest services like video on demand, interactive gaming and time shifted TV.icontrol mall and A-Tube video classified advertising could also be subscribed to, he added.

Kaushal said that IPTV would help to reverse the trend about declining subscribers for landline phones in the state. At present there were about 24,000 broadband users in Himachal and we target to expand broadband service to 48,000 by the end of this financial year, he said.

After Shimla, IPTV within six months is proposed to be launched in Solan, Mandi and Dharmshala. Theoretically, IPTV can been provided to broadband users anywhere in the state and we have kept a target of roping in 12,000 subscriber for the new service, he said.

Sanjay Vats, operation head of Aksh Optifibre, who was present on the occasion claimed that icontrol was the first IPTV provider in the country to introduce rewinding functionality, which empowers the viewer to plan TV viewing by giving flexibility to rewind, pause or forward already televised programs.

The service enables you to take control of your TV watching as per your requirement, he said.

He said that their company had a revenue sharing tie up with BSNL for entire north India, which included Punjab, Himachal, Rajashtan and west UP Haryana and Jammu & Kashmir.

We hope to reach 48,000 subscribers by the end of the fiscal in the northern region, said Vats.

Aksh Optifibre is also providing IPTV and VOIP services in Delhi and Mumbai under an agreement with MTNL.