Shimla: Post-partition, it was at The Peterhoff that the trial of Nathu Ram Godse, assassin of Mahatma Gandhi, was held in 1948, but today BJP leaders including LK Advani, on its first day of a â€˜Chintan Baithakâ€™ at the same venue expelled senior colleague Jaswant Singh from the primary membership of the party without even a customary show cause notice. 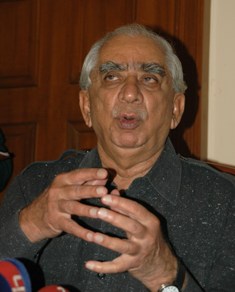 Rajnath Singh, party president, let the media know early in the day that Jaswant Singh had been expelled from the party as BJP had disassociated from the view he had expressed in the book on Mohammad Ali Jinnah, the founder of Pakistan.

He said the decision to expel the senior leader was taken by the central parliamentary board.

By way of an explanation as to why the party did not take such a decision in Delhi itself, Rajnath Singh said, â€œattempts were made to contact Jaswant Singh in Delhi on Tuesday and dissuade him from attending the Chintan Baithak being held here, but he could not be reached for by then he had set out for Shimla.â€

The expulsion order was conveyed over phone at about 1 p.m. to Jaswant Singh, who was staying at Hotel Oberoi Cecil that is just about 500 meters away from Hotel Peterhoff.

In the eye of the controversy is Jaswant Singh book ‘Jinnah — India, Partition, Independence’ in which has held Jawaharlal Nehru responsible for the partition of India and Jinnah has been “demonised” in India.

At the book launch, the writer had praised Jinnah, saying the “painful” part of history cannot be wished away for which the Pakistan founder was responsible.

In colonial India the old Peterhoff served as a residence for Viceroys and governor generals. At least seven Viceroys and Governors General, including Lord Elgin, have stayed at the Peterhoff.

After independence, the building was converted into the Punjab High Court, and Nathu Ram Godse, the man who assassinated Mahatma Gandhi, was tried here.

After Himachal Pradesh was carved out, the heritage building served as the Governorâ€™s residence till it burnt down in the 1980â€™s.

The Himachal government built an imposing residence in place but by then the governor had converted Barnes Court, the building where the 1972 Indo-Pak treaty was signed, into a permanent residence from the temporary one that it was intended as.

Left in the lurch today The Peterhoff is ‘a heritage luxury hotel’ operated by Himachal Tourism.