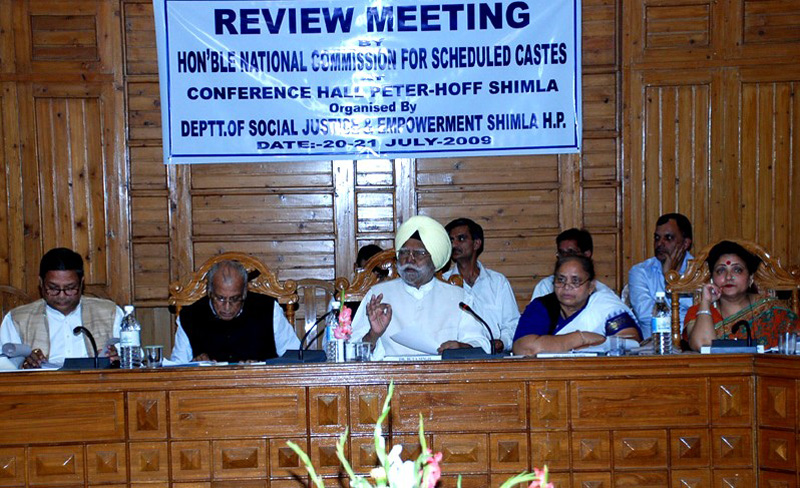 Shimla: National commission for Scheduled Caste slammed Himachal Pradesh for by-passing constitutional provisions and denying scheduled castes their rightful due in special allocation of funds, reservations in jobs or in addressing atrocities being inflicted upon them.

Buta Singh, chairman of commission said that the commission has given 15 days to the state for responding to various issues that figured in a meeting with officials. â€œIf the state fails to fall in line, the commission will ask the centre to hold a joint meeting for addressing outstanding issues,â€ he said.

The commission which broadly oversees Protection of Civil Rights Act and Atrocities on SCs Act has pointed out that the state was still to constitute a committee for resolving atrocities being committed on scheduled caste people.

He cited a case of 16 SC families from Bhoranj in Hamirpur who were allegedly attacked, uprooted and incarcerated for over two years. â€œDespite a court order asking for registering an FIR against the perpetrators, the government has failed to act even after seven years,â€ he said.

In another case, he said that big land owners had cheaply and forcefully bought out land owned by SC families in Karsog for this area is to be acquired by the government for setting up a cement plant by Lafarge, a multi-national company. â€œA complaint stands filed with the government but it has failed to respond,â€ he said.

A Balmiki colony in Krishna Nagar was facing displacement as the municipal authorities had issued compulsory acquisition notices, the commission cited.

About backlog in filling up job vacancies reserved for SC candidates, Buta claimed that the government was unable to furnish the complete data. He said that in state PSUâ€™s of the about 1000 jobs for SC category, 655 were lying vacant. Of the 19,490 teachers employed only 1600 (8%) belonged to SC category.

The commission held that Himachal and Punjab had failed to implement the 85th Constitutional Amendment. Himachal has wrongly taken the matter into court where the judgement stands reserved. â€œHow has the government filled posts that were to be kept vacant, pending decision of the High Court,â€ asked the chairman.

He mentioned that constitutional provisions made it mandatory for allocating special funds in proportion to SC population base in the state but it was only in the current year that such a conditions stood met.

The SC population in Himachal is 24.28% but fund allocation has never been in proportion to that and has been allowed either to lapse or was diverted for other schemes, said Buta Singh.

Most atrocities on SCs happen in UP â€“ Buta Singh

Buta Singh said that the commission had challenged an amendment carried on SC Atrocities Act made by the UP government before the Supreme Court. He claimed that other than rape and murder, other crimes against SCâ€™s had been removed by the UP government in a central legislation carried out by parliament.

He said that largest number of atrocities against SCs were being reported from UP and chief minister Mayawati needed to address their problems instead of trying to hinder working of the National Commission for Scheduled Castes in the state.

A mentality to burn the property of opponents, which was done in the case of Rita Bhauguna needs to be condemned, he said.

â€œErecting statues of national leaders was honourable,â€ said Buta, â€œbut placing statues of elephant all over a city was overdoing it.â€