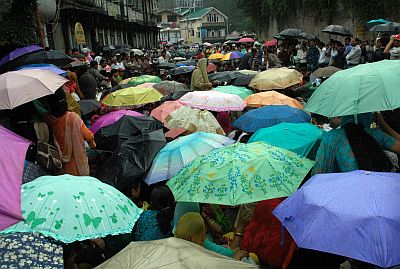 Shimla: After lying low for months, PTA teachers were again an agitated lot and held a large demonstration outside the civil secretariat, today, demanding a stable policy for securing the future of the grant-in-aid supported appointments made by the previous government.

Mehta said that the chief minister assured them that their issues would be looked into. â€œIn a week, we will take a call about further action on the agitation after the government makes it stand clear on the demand charter presented today, he said.

About the set of demands, he said â€œwe have asked for modification to termination orders served on about 150 PTA teachers after the government has replaced their positions by appointing regular teachers in place,â€ he said. This has happened even after an chief ministerâ€™s assurance to the contrary, in response to an earlier agitation, he added.

Another demand pertained to resolving the issue of having sacked 977 PTA teachers earlier, after a government inquiry had found the appointments not in conformity with the norms.

Mehta claimed that the PTA teachers had not received any salary for 4 months as no grant-in-aid was released by the government. â€œWe have asked the government to make provisions so that PTA teachers get their salary on a monthly basis,â€ he said.

â€œBut primarily we have asked the government to have a stable policy for teachers recruited under PTA for ensuring us a secure future,â€ said Mehta.

The issue has been contentious ever since the previous Virbhadra Singh led congress government to fill up vacancies, mainly in rural schools, had filled up about 15,000 posts through Parent Teacher Associations (PTA) of the schools which were short on staff.

Then in opposition, BJP had cried foul, terming them as backdoor recruitments and on assuming power in December 2007 had threatened to sack them en masse.

A one man committee was set up to go into the legality of the issue, complaints about nepotism and other irregularities were invited, to which over 3000 complaints were received and 977 candidates were indicted and sacked.

A long drawn out agitation was called off only after assurances from the government that their services would remain till the vacancies are filled.

The matter was also dragged to court, who asked for framing of a policy for such appointments.