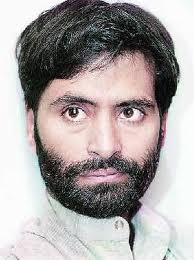 Malik was leading dozens of supporters after the Friday prayers during a JKLF march to city centre Lal Chowk from the adjacent Maisuma locality.

Police intercepted the march and arrested Malik and five other JKLF leaders. This resulted in protests as people in the area resorted to heavy stone pelting at police and Central Reserve Police Force (CRPF) personnel.

Security forces used batons and tear gas shells to disperse the protesters who kept regrouping to throw stones at the forces.

Malik and the five leaders were taken to Kothibagh police station.

Friday’s protest was against the sentencing of three Kashmiris by courts in the state for their involvement in separatist violence during the last 23 years.

Malik told IANS: “After 20 years, Kashmiris are being sentenced to life imprisonment. Why were we released from jails in the first place? If there is no embargo on peaceful protests I must ask the Indian civil society why are old cases being opened up against Kashmiris now?”

“Ours is a peaceful struggle and pushing people to the wall would be dangerous. I appeal to the intelligentsia and the civil society in India to ponder over the serious situation that is emerging because of the sentencing of our people to life imprisonment,” Malik added.