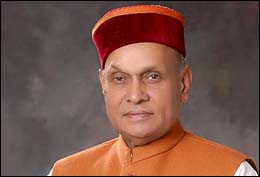 The chief minister has sought union minister CP Joshiâ€™s intervention to fund three major drinking water schemes in Kangra and Bilaspur, which have been estimated to cost Rs 172.22 crores, a government spokesman said.

In a letter to Joshi, who is the union Rural Development and Panchyati Raj minister, Dhumal has pointed out the water deficiency and vulnerability of the Changer region where drinking water supply schemes need to be augmented with additional schemes.

The chief minister states that detailed project reports for a drinking water scheme for Khundian, Jaisinghpur and Palampur costing Rs 68.33 Cr, another one for Sadar, Ghumarwin and Jhanduta in Bilaspur district costing Rs 64. 66 Cr and one for Jaswan and Pragpur in Dehra tehsil of Kangra costing Rs 39.23 Cr had been prepared.

Seeking early clearance of the projects proposed from the central ministry, Dhumal said, â€œall these major schemes would need central funding so that basic water needs of the inhabitants could be solved.â€

The Shivalik zone in Himachal is extremely prone to summer conditions for water needs as there is hardly any snowfed perennial streams catering to the region and noticeable climate change as well as river diversions for hydropower generation has further added to water scare situations. The government schemes proposed, hope to lift water from dams and perennial rivers for meeting the needs of the people.