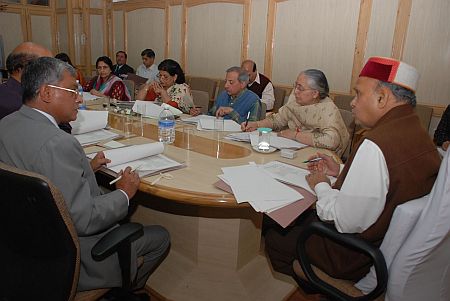 Manoj Kumar, director industries disclosed that the projects proposals cleared include a Rs 74.30 crore IT enabled unit of Essar Group, a Rs 47.29 crore polyester and cotton fabric unit of Paragon Knit Ltd, a Rs 32.75 crore unit to manufacture equipments for wind turbines by Gujarat Flurochemical Ltd, a Rs 29.45 crore confectionery by UB Biscuits, which is a wholly owned subsidiary of UK based Unified Biscuits and a Rs 57.56 crore expansion unit of Sarvottam Care, a pharmaceutical unit.

Sources revealed that the IT enabled unit proposed by Essar Group was scouting for land in Shoghi industrial area near Shimla. The project included investments of Rs 17.50 crore for computers and networking and was expected to generate about 1500 jobs mainly for setting up a call centre.

The Paragon fabric unit of 4200 MT capacity was proposed to come up in Amb area of Una district. Other than cotton and polyester fabrics, blended and a special fabric Spondox was also proposed to be manufactured in the new unit.

The Gujarat Flurochemical and Wind Turbine Equipment units were also proposed to come up in Una district, sources said.

Speaking at the meet chief minister Dhumal said that new industrial units should be directed to employ local manpower after upgrading their skills.

Providing 70 per cent employment to local people at all levels had been made mandatory to every industrial house, he said.

Dhumal said that since the new government assumed power in 2007 December, 97 industrial investments proposals had been cleared involving an investment of Rs. 7,938.58 crore. These units are expected to generate employment for 23,054 persons.

Besides these, the government had cleared 30 expansion proposals, which involve an additional investment of Rs. 975.53 crore and generate another 3,563 new jobs, he added.

Despite an economic slowdown the world over, pace of industrial development had not been effected here, he said.