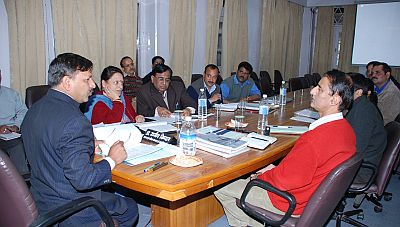 Shimla: To bring normalcy in Tanda Medical college following the tragic death of a medical student after he was allegedly brutally beaten by his seniors, health minister Rajiv Bindal has asked the institution to raise the discipline bar and act swiftly, should any complaint or information about ragging surface.

Talking to My Himachal News, Bindal said that to restore confidence among the medical student community and the academic staff at Tanda, he personally did hold separate meeting with them last week.

Terming the Aman Kacharoo death as murder, the minister said that the government would do all to meet out exemplary punishment for the culprits involved.

The minister denied media reports that some first year students were not rejoining college out of fear following the tragic death of one of their classmates.

The college authorities are taking steps to instill confidence. The college is holding a function in which a pledge would be taken for banishing ragging and maintaining cordial relations among the students community as well as with the teaching staff, he said.

The college has also been asked to start a helpline, on which any parent or student could register a complaint about ragging or other matters anytime, the minister said.

In response to Supreme Court having issued notices to the state government over the incident, Bindal said that the government was yet to receive the orders.

About not having taken enough action against the college authorities, primarily accountable for the lapse, Bindal said, while the hostel warden stands suspended, but any criminal liability would be established only after the outcome of the magisterial inquiry.