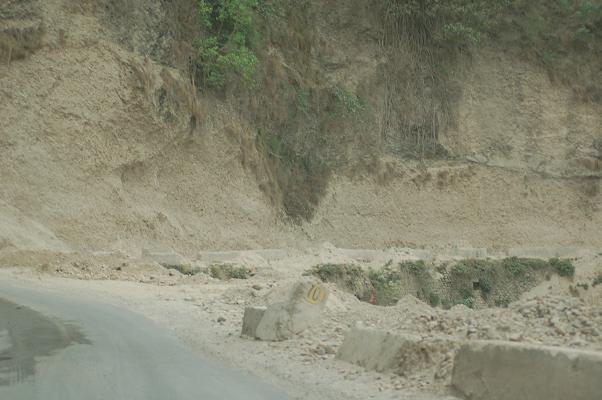 PALAMPUR: The 220 kilometers Pathankot- Mandi, National Highway- 22, which plays significant role in the economy of lower region of state and is also among the important national highways of the country, being a defense road, connects Pathankot right up to Leh via Manali,Â  is in bad shape. At present the condition of this highway is worse than the rural roads.

This road was declared national highway about twenty two years ago, keeping in view the defense requirements for supply of goods and other defense equipment to Leh and other boarders areas. Even after 22 long years the state Public Works Department could not convert even 25 percent portion of the road into a national highway. The Himachal Pradesh Public Works Department, which looks after the execution and maintenance of this highway has virtually neglected this road and funds provided by the Ministry of Surface Transport , from time to time are allegedly transferred to other national highway under political consideration .

Army authorities are likely to resume the defense supplies to Leh through this road by the end of May, 2009 but the conditions of road between Pathankot and Nagrota Bagwan , Joginder Nagar and Mandi is bad shape, vehicle carrying heavy army supplies and defense equipment would find it difficult to move on this road.

H.P. PWD who look after this highway is well conversant that this was a the lone route for carrying army supplies to Leh, Kargil and other boarder areas before the closing the of high passes like Rohtang and Baralacha, but it had initiated no steps to repair the damaged portion of road at many points. Major portion of highway near Gumma have developed big cracks and most of the drivers refused to take their loaded trucks through this portion.

The Construction of one dozen culverts between Malan and Nagrota Bagwan was going on for the past six years but no steps had been imitated for its early completion resulting in fatal accidents daily. Besides, the bitumen coat put on the national highway at many places almost six months ago have washed in last rains attracting wide spread criticism on the quality of construction.

Likewise, eight kilometer portion of highway between Ghatshani and Urla, Drand and Tandu have virtually turned into kacha road. No bitumen is seen on the surface. Accidents are taking place daily in this portion also but PWD authorities are unconcerned with the situation. If no early measure were taken in this regard then the army authorities may not be able to carry their supplies to Leh this year.