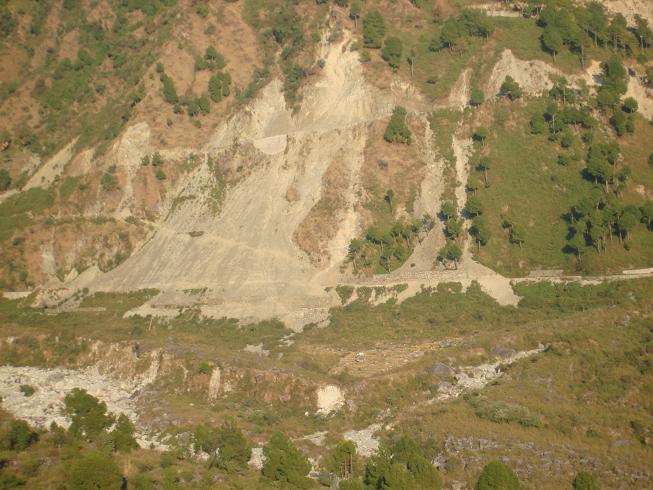 PALAMPUR: Resentment prevails among the residents of Palampur over the reckless and indiscriminate cutting of green hills by a private company executing 15 MW power project here. Villagers from twelve panchyats adjoining the town and residents of Palampur Municipal Council have lodged a strong protest against the reckless cutting of green hills, dumping of debris in local water sources. They demanded immediate suspension of construction of power project as it had completely disturbed the ecology of the region and badly damaged twelve irrigation channels and drinking water supply schemes feeding two lakh populations of Palampur region. The illegal dumping of debris in the Neugal Khud had resulted in serious drinking water crises in the region.

The My Himachal team visited the project site and affected villages, where it was revealed that the villagers had informed the local administration and forest officials about the illegal activities of the company and damages being caused to environment long back. Instead of taking action against the erring company the government machinery was protecting the company, villagers alleged.

They said it was a matter of grate surprise that till date no case has been registered against the company for its illicit felling, reckless and unscientific cutting of hills and damage caused to water sources and other public property. Moreover, no compensation was paid to the families of three labourers who were killed on the project site because of negligence of the company last year and the administration remained a silent spectator, they alleged.

Mr. Parveen Sharma, local MLA talking to The My Himachal said that he had already taken up the matter with the Forest and Environment Minister J.P. Nadda, who had assured him that company, would not be allowed to indulge in reckless cutting of hills and dumping of debris in local streams. He said minister had directed the forest department to initiate action against the company.

Divisional Forest Officer A.S. Banyal when contacted by The My Himachal said that the forest and environment department has already fined over rupees two cores to the company for damages caused to the precious forest wealth of the state. He admitted that till date company has not deposited even single penny in the state exchequer. He quoted that last year the company was fined of rupees 98 lakh by his predecessor and last month he had again levied a fine of rupees 65 lakh. He said both the times company was found indulged in reckless cutting of hills and damaging green cover on Dhualadhar hills. He said he had in writing directed the company to stop entire construction activities on the project site till the fine was deposited in the state exchequer.

However, The My Himachal team visited the spot and found that the execution of project was going on as usual and the company had not cared for the notice served by the forest and environment department last month to stop the work. No senior official of the company was available on the spot for comments. A supervisor present on the site said that management and never asked him to suspend the construction activities.

Meanwhile a senior officer of the Irrigation and Public Health told The My Himachal that IPH department had asked the company to pay damages worth three crores for loss caused to one dozen water supply scheme of the Palampur division. He said matter was already in the notice of IPH Minister Ravinder Singh Thakur, who had also called the manager of the company and directed him to pay the damages. Till date the IPH department had also not received any money from the company.