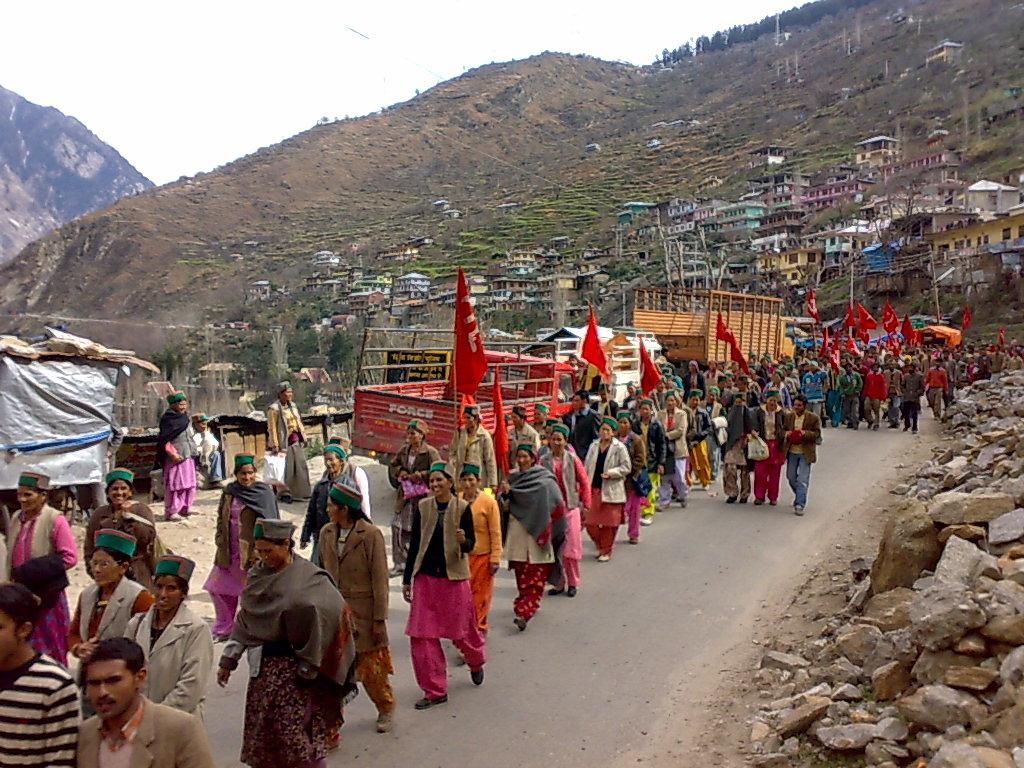 The district of Kinnaur in Himachal Pradesh is full with scenic beauty apart from being rich in hydel resource. The tribal district comprise of Kinnaura tribe also known as kinners. There are various connotations to this tribe. Some say they are the aboriginals who were pushed back by the Aryans and the Khasas another tribe of the region few believe them to be the descendants of Khasas themselves. Whatever their origin may have been but the people are very hospitable and have produced one amongst the most honest administrative officers in the state. The entire district has a population (projected till 2008 by the statistical department of HP) of 84545 with 45517 male and 39028 females. Quite a huge gap in the sex ratio. Surprisingly, this tribe also has a large dalit population, which according to official figures is just 10%, but I can say the actual figure must be more than 25% . Why? Because a good number of people opt for the Scheduled tribe status instead of Scheduled caste. Though caste discrimination amongst the tribals is rampant, that ranges from social, economic, political to of course cultural. Even the colour of the famous â€˜Kinnauriâ€™ Cap and the manner of wearing bears a cultural ostracisation. Dalits are prohibited from wearing Green colour caps.

Presently there are 21136 households in the district. The total land cultivable is just 9355 hectares, whereas the forest occupies an area of 458297 hectares and non cultivable land is 612387 hectares (all figures from Government of HP Statistics department). This shows that the average land holding with the households is less than 0.5 hectares (0.44 hectares). This land is insufficient for the survival of a family. In addition, the dalits are worst placed, they own less than the average land. Quite interestingly, the tribals in Kinnaur are unlike other forest tribals or forest dwellers in the country where they just occupy land and have no legal document. The kinnauras either own pattas (a document showing their ownership) or they have been awarded land under the â€˜Nau Taurâ€™ scheme (essentially a policy of the government till 1968 and then further extended till 1980, meant breaking of new land and further distribution to the people).

Apart from the land that they owned though very scant and limited the people of the tribal region also enjoyed certain other forest rights.

i.The foremost one being the â€˜TDâ€™ right (already written in one of the previous columns), whereby the villagers used to get access to the forest land for timber for house construction, repair, fuel wood, etc .

ii. Right for cultivation in forest land in a place called â€˜Kandasâ€™(a place on the hilltop where there are no trees , remains snow covered and is accessible only during the summers.) . These kandas are very fertile and vegetables and other such crops are cultivated here.

iii. Right for lopping of trees was allowed under silviculture ( art and science of cultivating forests) . This right where on the one hand providedÂ  fuel wood to the people was essentially a right for bread and butter for the blacksmiths who used to burn these lopped branches and convert them into coal for the sharpening ofÂ  various kinds of tools and other agricultural implements.

iv. Similarly there was an age old right of collecting medicinal herbs and plants for commercial use.

Now with the fresh policy direction though not yet finalized all the traditional rights have been put on hold and the provisions of new policy are very dangerous, which will eventually throw the tribals out of their lands. (Already discussed in previous columns) 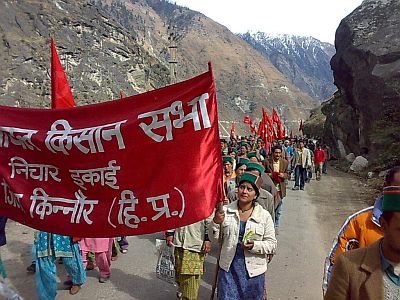 The so called development and challenges

The area in the tribal region and the people remained a neglected lot. There are over a score of villages in Kinnaur alone which still stand unconnected through the road network. These include Roopi, Panvi, Baturi, Taranda etc. The main road connected to the border is by the Border Roads Organisation. A very interesting piece that needs to beÂ  added here is the slogan given by a former leader of the tribals Devi Singh in 1950s whereby he stated, Quote â€œ Peking Nazdik hai, Dilli Door Haiâ€Unquote, meaning Peking the capital of China is closer to Delhi. Was arrested, however later on he happened to be a minister of cabinet rank in the JP government in the state. It was facing this reality that some central sponsored schemes and budgetary allocations started pouring in for the tribal development in the state.

The district has immense potential of hydel generation. Nearly 10000 MW. And this also develops a prime contradiction in the area. Whereas this potential can be tapped for the development of the state and the area, no doubts of the nation as well, but because ofÂ  the ruinous policies , the people of the area i.e. Kinnaur are becoming the worst victims. These hydel projects both mini and mega are chiefly being constructed by private houses and violation of norms in their hallmark. The pertinent issues of the people with respect to their livelihood and environment can be summarized as:

According to various studies conducted by independent scientists and geographers (Prof. Nilanjana Das et all), the Tibetan plateau is getting submerged and this pace of unchecked development is further enhancing the ongoing natural process. Besides, accordingly, the Satluj river flows against the gradient which is why it is quite turbulent at places and conduiting or changing the course would further aggravate the problems. Now it is estimated that the entire satlujÂ  river from Khab where it enters India from China to the famous Govindsagar lake, also known as the Bhakra Dam would be conduited. It means that the river will be diverted the course would be changed underneath the mountains and through various surge shafts, hydel generation would be done.

But since this is a principal source of local rains as precipitation and humidity in the environment remains because of the flow of the main river and innumerable other rivulets which are also being targeted for hydel generation in the similar manner, the conduiting will severely effect localized precipitation. According to the study this would eventually lead to a condition where there is no rain or very less rain.

Another associated problem with the conduitingÂ  of the river is that the Head Race tunnel as its called runs into several kilometers underneath the mountains for which large scale excavation is required through blasting and drilling. An estimated 15 years project work of Nathpa Jhakri Hydel project (NJPC)Â  with a generation capacity of 1500 MW used thousands of tones of gelatin for the blast work.Â  Resultantly, since this range of mountains is amongst the youngest one and the strata being loose or weak, such blasts have created a condition whereby

(a) the natural springs and hot springsÂ  have either dried up or are in a process of drying. There is a famous place called Sarahan that falls in Shimla district. Because of the tunnel thatâ€™s gone underneath a village called Garath(a local name for a water mill) has dried up. One can imagine that the village bore the name because of the quantum of water due to springs was available that even water mills could be run , has now dried up.

(b) The grazing fields have become dry.

(c) cracks in the houses is a common feature.

(d) There is a regular phenomenon of slides . A case to the point is that of Nathpa village from where the Satluj has been diverted to an underground channel through a run on the river dam technology. Since, this village is just above the dam and because of blasting and such other associated activities conducted, not only has this village started sliding , also heavy boulders have started shifting thereby claiming lives of over a dozen people. The foremost demand include that of declaring this village in Kinnaur as unsafe. What tragedy, the village that initially lost some of its land for the development work will now loose its existence.

(e) To add to the woes the employment generated through these projects to the local and effected people is virtually negligible. Less than 100 in NJPC. That too after a prolonged struggle led by the Himachal Kisan Sabha.

It was in such a background that the people of Lower Kinnaur decided to oppose the 1000 MW (BOT) Jay Pee hydel project in Wangtoo Karcham region again on the Satluj river. The people fought valiantly in which the police resorted to massive can charge and firing that hit half a dozen tribal youth, fortunately none died. Somehow true to its colour , JP was able to break the strike of the people and as usual the governments are of no concern for this particular management , the JP has started work on Wangtoo Karcham project. It was during this periodÂ  of agitation that the people mainly aged once again resounded their anger and stated, â€œIsse Acha To Hum Cheen Ke Saath Hote to Behtar Thaâ€, it would have been better had we been with China. Despite the fact that there is a huge unemployment reserve in the state and the district, (20% of the population) , employment to the local inhabitants is avoided. In JP where nearly 8000 workmen are engaged in construction activity not more than 150 are from Kinnaur.

Hence the so called development activity is also ruining the traditional Kinnauras economy and livelihood because of the rampant neo liberal policies. 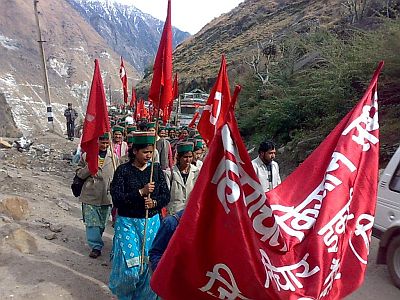 The issue of Forest Tribal Act

As already stated, there is very less land available with the people. The Kinnauras have also encroached upon some forest and government land. Now with the Forest tribal act they can become potential owners with pattas on their names. Despite the fact that the act passed by the central government specifies the land to be 4 hectares, in Himachal the limit has been reduced to 1.5 hectares. That too, the government is shirking from its responsibility and is trying to shelve the act altogether by fixing a deadline date for the submission of forms. Earlier it was fixed for 31 January, 2009, now its been extended to 15 March, 2009 under the pressure from the Himachal Kisan Sabha(HKS). The HKS has taken up the cause and is demanding the extension of the dates to 30 June 2009 as presently many of the areas are covered under the snow and it is not feasible to measure such land till March 15. Besides according to Smita Gupta, the act of HP government is illegal as this Forest Tribal act 2006 is a law and no final dates can be fixed for the submission of forms.

The HKS conducted a massive campaign against these policies and on half a dozen demands a demonstration was organized. The demands include :-

i. Extension of dates to June 2009 and strict implementation of the Forest tribal act.

ii. Employment on priority basis for the local youth.

iv. Alternate passage for JP transmission line. It needs to be mentioned that on the one hand the government is not prepared to give the peasantry its due in the form of TD rights, on the other thousands of trees will be cut for the laying of transmission line of JP.

vi. Declare Nathpa village as unsafe and rehabilitate the villagers in adjoining land.

More than 24 village panchayats in a period of 20 days were covered in which a call for a mass meeting at BhawaNagar was given. Hundreds of people thronged the venue on 16th February. The milk price was fixed for Rs 18.00 with the government intervention. Now the rally has further given a call for a bigger mobilization for 13th March 2009 at the same venue. Also the HKs has resolved to enter the forests enmass after 13th March for lopping of trees and this call has been made public to the police and forest officials as well. Preparations are undergoing to make both the calls a success