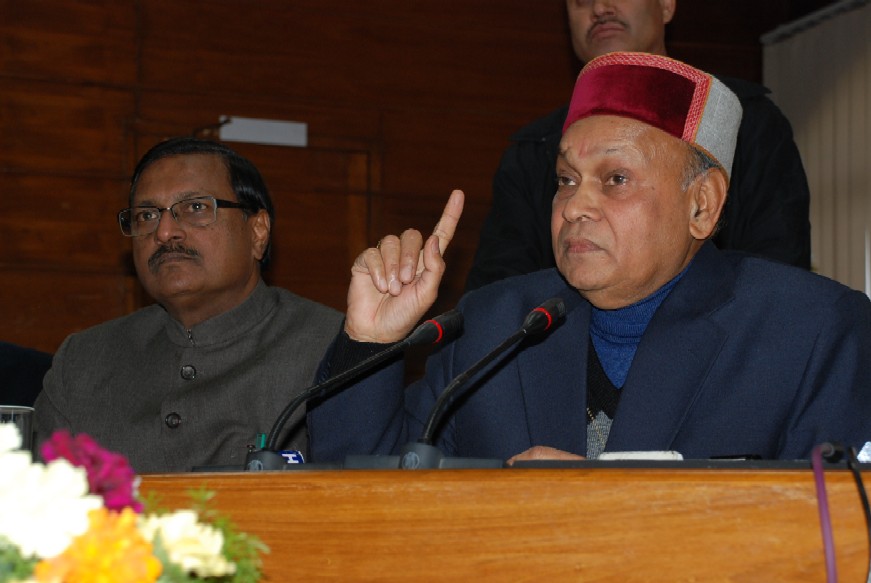 Shimla: Having stepped beyond the election manifesto document, chief minister Prem Kumar Dhumal, said that his government had strived to convert the state into an educational hub, expand rail network, e-governance and work for achieving carbon neutrality.

On completing a year in office, the chief minister speaking to the media said that about 80 percent of the election manifesto commitments, which had been converted into a government policy document, stood fulfilled and the government had delivered more than what had been written thereof.

Among the achievements, he counted getting the central government to agree for expanding the rail network in the state.

A time schedule for the Bhanupali-Bilaspur rail track has been laid out and it should become operational by 2014-15. Road congestion because of transport of cement from inland plants would ease out once this track becomes operational, said Dhumal.

The central government in principal had agreed to the states proposal of laying a rail line to Leh, for which a survey and feasibility report was being worked upon. The state had been linked up with a Jan Shatabdi train that had reduced fares substantially between Una-Delhi, he said.

He said that his government had taken initiative for working to achieve carbon neutrality. Its perhaps the only state that was preparing a environment policy and had set up an environment fund, the chief minister said.

Other achievements he mentioned included securing more health and educational institutions, empowering the citizen by rolling out the Himachal State Wide Area Network (HIMSWAN), introducing a grievance portal, getting Gas Authority of India (GAIL) to agree to lay a gas pipeline to Baddi-Barotiwala from Rajpura, getting a National Institute of Fashion Technology (NIFT) and a food craft institute for Kangra, a hotel management institute for Hamirpur sanctioned.

The government would set up medical colleges in Hamirpur and Una, had got an ESI medical college and hospital for Mandi approved, classes at IIT Mandi would start by 2009 and land for the central university in Kangra had been provided.

Short of admitting that the industrial package had failed to deliver jobs for Himahcali youths, chief minister Prem Kumar Dhumal said that industry was being made to partner in upgrading skills of the unemployed so that they could be absorbed.

The state had suffered heavy losses because of unprecedented rains, the losses of which he put at around Rs 2,000 crore but lamented that the central government had not provided any relief to mitigate them.