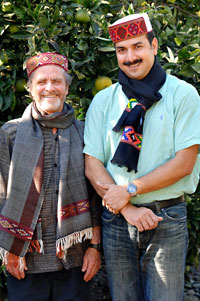 Seva in Sanskrit means to serve. Payson Stevens and Avnish Katoch are two individuals that believe deeply in this concept. Through their combined efforts they are making Himachal Pradesh  a beautiful, remote area in India a better place.

Payson Stevens, a Del Mar resident, who resides here six months out of the year and in Kullu Valley the other six months, tells the story of watching a mother die in childbirth in front of the home that he was building there with his wife, author Kamla Kapur. It was a breech birth and it had taken the villagers three hours to carry the woman out of the mountains. Moved by the experience of watching someone needlessly die due to lack of basic healthcare, Stevens turned to his wife and said, “We cannot be just neighbors; we must be good neighbors.”

Himachal Pradesh located in Northern India is a rugged, sparsely populated state right below Tibet. Stevens explains, “Their way of life is still five hundred years old. They still plough the fields by hand and with cows, gather firewood and raise domestic animals.”

Stevens, an earth scientist, writer and artist, was living and working in the area as a consultant to the Great Himalayan National Park on issues of nature conservation and sustainable livelihoods. But the drama that unfolded in front of him that day moved him to look into the healthcare in the surrounding Himachal area. With the exception of a small clinic that came once a month, there was none. Trained in basic first aid, Stevens had been treating children in the area with minor health needs. Over time, he saw children with common childhood diseases such as measles, mumps and hepatitis  diseases easily eliminated with vaccines.

After learning that there were no immunizations in the area, they wrote a check and got a program started. That year with the help of doctors and locals volunteers, they immunized 300 children. Named the 2005 Health Mela, it was a carnival of theater, music, dance, and education focused on bringing a community-based health program to the remote villages. When they arrived in the villages, “the children came. It was about this time, that Stevens was contacted by Avnish Katoch, a native of the Himachal state and now living in Harrisburg, Pennsylvania. Katoch was forming an organization called My Himachal, an NGO, dedicated to enriching the education, health care and employment in the area, as well as preserving their rich culture.

When Katoch left his home of Himachal eight years ago, he vividly remembers a friend saying to him, “When you guys leave the state, you forget the state. I promised him I would not forget my community. Katoch, a software engineer, developed a Web site called My Himachal, bringing his homeland to the rest of the world. He was driven by a need to connect with his people and help the community. The Web site is a comprehensive place dedicated to raising awareness about the area, with daily news updates. He contacted Stevens and they joined forces to help the people of Himachal.

The two were in Del Mar this past weekend to be honored for their work with My Himachal by Project Concern International (PCI), one of the largest non-profit organizations in the United States. The event on Nov. 8, titled Hands Across America 2008, celebrated the commitment of a few individuals who are making a real difference. Stevens, the recipient of the award, is in good company. Dr. Muhammad Yunus, the 2006 Noble Peace prizewinner from Bangladesh was also honored. A total of 30 NGO’s were honored at the event. Through their combined efforts, My Himachal has provided healthcare to over 1,600 children so far consisting of immunizations for measles, mumps and hepatitis B and nutrition education. At the time the program was started, it was estimated that 85 percent of the children in these remote villages were malnourished.

Many people, especially those with a heightened social consciousness, may not know where to begin, but they are compelled to help others in some way. Stevens and Katoch attribute their outstanding success to taking small steps. I had friends who had big agendas. They said, we want to work for India, but my focus was always keep it small. I wanted to help my community, and not look at a bigger agenda.” Katoch explains.

Stevens adds, “Because we work on a small scale, any money that is raised, we can say that 100 percent goes directly to the project.” Even ten dollars can make a difference; it can help train a health care professional or provide immunizations for one child. He adds that Himachal is a place where the need is so obvious and it takes so few American dollars to help.

But the rewards for these men are evident in the enthusiasm with which they speak of their project. It is truly a labor of love. We love these people. I feel I come back to beautiful San Diego and it is so clean, but also a little empty. Everybody is so busy running around  but there is a richness that comes from giving back to the community. It enlivens me and Kamla enormously,” says Stevens. They are a reminder to us all that one small step can make a big difference. Stevens cites Gandhi’s famous quote, “We must become the change we want to see in the world.” He and Katoch are proof that change can be made, little by little. The organization welcomes anyone who would like to join them in this mission. For more information about My Himachal visit their Web site at www.myhimachal.com