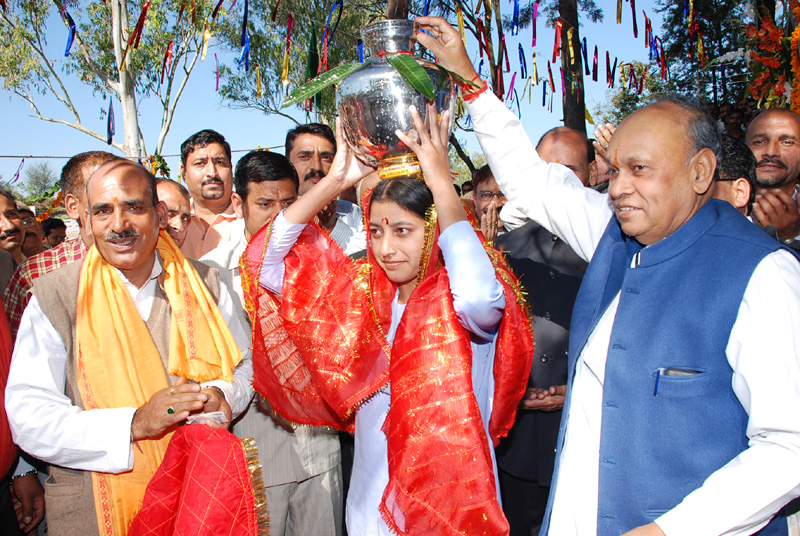 Shimla: Rs. 632 crore would be spent on providing drinking water and irrigation facilities during current financial year, Pinjore-Baddi road to be improved by Haryana Government by spending Rs. 10 crore and work to start from November to facilitate the industrialists in the area, Rs. 10 crore Hotel Management Institute to be set up in Sasan (Hamirpur) and Rs. 6 crore to be spent over Food Craft Institute being set up in Dharamsala.

This was stated by Prof. Prem Kumar Dhumal, Chief Minister in his address delivered in a public meeting at Ukhli Mair in Hamirpur district after he dedicated the augmented LDWSS Ukhli Mair, completed at a cost of Rs. 1.32 crore and LDWSS Bhota town to completed at a cost of Rs. 93.38 lakhs to the people of the area today. He added that Rs. 141 crore worth of subsidy was being provided by the State Government over essential commodities to the ration card holders.

He said that the State suffered a vast loss of Rs. 2076 crore due to rains but not even a penny had been compensated by the Centre and the entire expenditure was being borne by the State Government from its own resources. He announced Rs. 7 lakh would be spent over GMS Ukhli Mair building and playground.

He also said that 16 percent, of 2070 crore of the total annual budget had been earmarked for the educational activities during current financial year. He said that Rs. 197 crore would be spent over infrastructure creation. He said that batch wise recruitments would be carried out to replace PTAs, 1712 to be recruited through SSSB and 1713 batchwise.