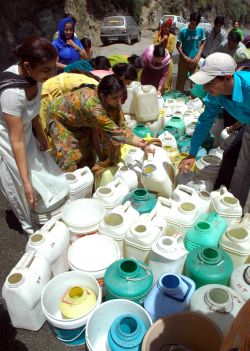 The state government had proposed a detailed project report on construction of gravity water supply scheme from river Pabbar to Shimla city.

Consultancy services for carrying out the survey, investigation, planning, preparation of detailed project report, implementation and commissioning support for renewal and rejuvenation of water supply and sewerage capacities for Shimla town, had been awarded to Water and Power Consultancy Limited, a central government undertaking.

The chief minister said that all the alternate routes were jointly inspected by a team of senior officers and experts who after taking all related aspects into consideration and to ensure regular water supply had recommended the alignment to pass through Deudi-Chirgaon-Rohru-Mehandli-Pujarli IV-Kadyon-Ganeshidhar (through tunnel)-Maltoo-Araihalaâ€”Ratnari-Mail Nallah-Reog (through tunnel)-Rain Ghati-Digiana-Shilaroo-Matiana-Theog-Kufri-Dhalli and proposed that the gravity main crosses through Ganeshidhar range and Kalbog Hatu range at an elevation around 2,500 meters.

It had been proposed to cross the gravitational route through intake point-Tangnu-Deudi-Rohru-Pujarli (alongside the road) and then to Ganeshidhar along Dogra Khad.

A tunnel of 750 meters length had also been proposed at an alevation of 2,540 meters below Ganeshidhar leading the alignment to Mel through Ratnari.

A 3 kms. long tunnel had also been proposed near Mel Nallah at an elevation of 2,420 meters to lead the alignment to Reyog, avoiding higher altitude of Baghi-Narkanda from the proposed route alignment progressing towards Shilaroo alongside the existing road through Kyara.

From Shilaroo onwards the existing National Highway-22 would lead the proposed alignment to Shimla-Dhalli Water Treatment Plant for further distribution to the town.

Chief Minister reiterated that he would personally be pursuing the proposal with the quarter concern for getting the same approved for sanction so that work on the project could be started early and completed in a time bound manner.

All out efforts would be made to strengthen the drinking water supplies for Shimla, said Dhumal.