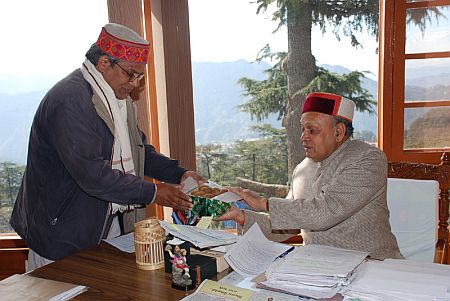 Shimla: A farmer, Neel Kamal Thakur, presented a box of Kiwi to Prof. Prem Kumar Dhumal, which was a produce of his 8,500 feet high altitude orchard at Patan village in Banjar sub-division of district Kullu. This is an example of successfully cultivating trans-climatic hybrid fruits in adverse climatic conditions.

Kiwi is a tropical fruit but Thakur produced it in a subtropical climate which is suitable to produce fruits like apple.

CM appreciated the effort and said that such progressive farmers are making great contribution to emerge Himachal Pradesh as the leader in the horticulture sector.

Dhumal also mentioned about two progressive farmers from Ghumarwin (temperate zone) and Kotkhai (subtropical zone) who produced apple and mango respectively, with no difference in the taste and color of the fruits.

Prof. Dhumal said that the state was poised to emerge as the leader in horticulture sector and to be known as the ‘Fruit Bowl of India’ where different species of fruits would be produced by its farmers. He said that the state government was according added priority to strengthen the horticulture sector with a view to motivate farmers diversify their traditional cropping practice and adopt modern one for better yield and remunerative returns.