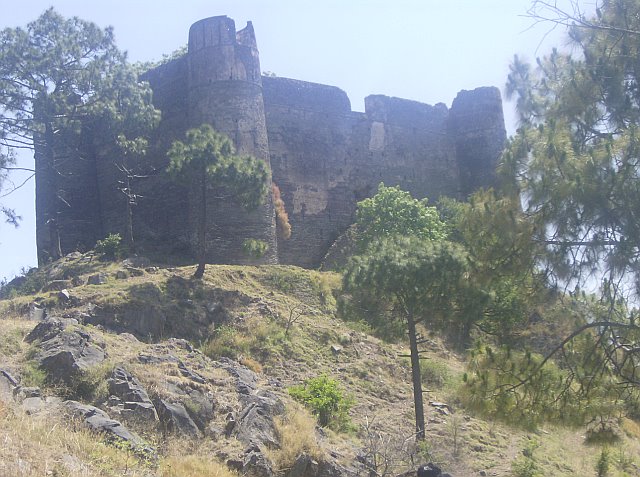 KUMARHATTI: Stands tall amidst in dense pine forest on a hilltop for long, the Banasar fort, about 20-km from here is now on the verge of crumbling. The strong big walls of the fort resemble to the unique guts of Gurkhas whose Army Chief Amar Singh Thapha is believed by mostly to built this fort to counter the might power of British , have now started to show the sign of collapse.

In fact the whole fort also known as Gurkhas castle is now gradually inching towards the day of its vanishing from scene. The fort that can be proved a goldmine in promoting adventures tourism in big way in this region has so far got no attention of successive state governments who claimed tall to make state prosperous by using tourism as a main tool.

The things have never gone further from the little efforts in from to grant some funds, doing surveys for fort’s maintenance and making unplanned ways to restore the pristine beauty of fort. Ironically a team member based in Shimla that had done survey of fort about a year back, revealed that it was hard to even match the 50 percent of architect quality of that period as well as the construction material used when the fort was constructed. 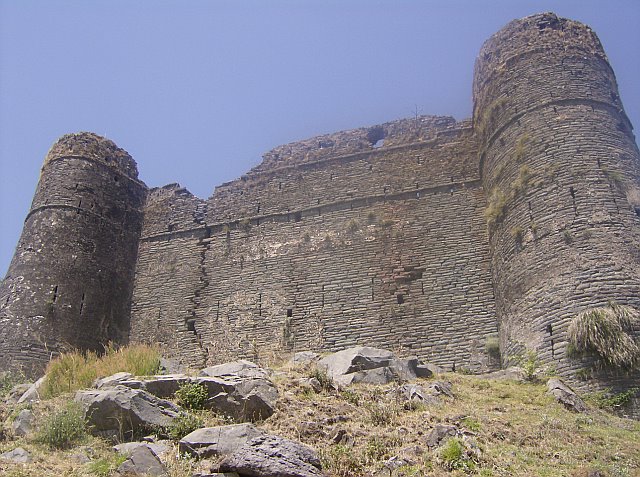 The fort walls could not be repaired thanks to the rare architecture done at that time, informed the team member. The construction raw material being used at that time was no more in practice now. Without that arrangements the repair of fort was like a hard nut to crack, rued the member seeking anonymity.

Moreover the Solan Forest Department that was entrusted with the job for fort maintenance, has too expressed its inability to do the repair work thanks to the lack of desired know-how.

Ironically, like its deteriorating condition the history of fort is also no where to find. In fact, the exact history of fort it still more or less like a riddle. There is no record available about fort history. There is nothing in British accounts about this fort and its garrison though there is a lot of course on forts at Jaithak, Malaon etc. with even maps of battles there.

However the famous belief is that the fort was built by Amar Singh Thapa.The fort was built after the famous treaty of May 15, 1815 between British General, Sir David Ochterlony and Amar Singh Thapa. There are some other believes that the fort was set up during Raja Patiala regime or by the Pahari Rajas as the check up post. Whether this particular fort/hill was part of the territory gifted/sold by victors British to ally Raja Patiala, or whether it had reverted to previous Pahari Raja are not known with certainty.

However this is sure that Sir David Ochterlony was highly impressed with the fighting skill of Gurkhas. This development led to the formation of first Gurkha Rifles. The regimental history of Gurkhas is well documented thanks largely to the British. 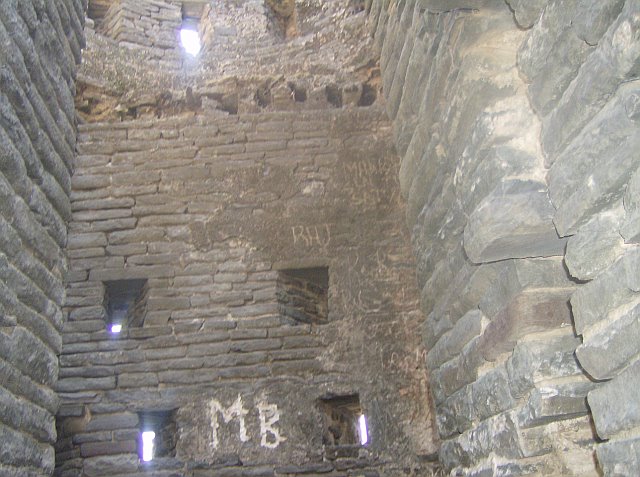 After trying hard to find concrete history of fort, a documentary filmmaker planning to shoot a film on fort sums up in distress; there are lots and lots of obvious questions but alas, such is the pathetic state of historical data in our country that there are very few authenticated answers. In fact, from Forest Range Officer, Parwanoo, to whom I wrote I was not able even to get a reply on providing me with the rather trivial information as to exact date from which fort, became forest land, rues filmmaker.

He further reveals, the gup-shup (street talk) one hears from old people in locality, just on memory should only be a starting point. It has a way of changing dramatically as tales are passed on from one generation to another. There should be minimal reliance on these in this case, especially since we are talking in this case only of history from about 1800 onwards in historical terms that’s like yesterday.

However with British having already built nearby Dagshai etc by 1845, and because they, unlike Rajas and Gurkhas, kept detailed records, it should be certainly possible to get definitive history. But sadly nothing could be found despite the best efforts, he laments.

However the elders of area mention “Patiala” as the raja whose ‘raths’ used to go past (on that still faintly discernible broad path near the fort) the garhi. May be Raja Patiala got this hill as reward for helping Ochterlony in beating the Gurkhas at Malaon in 1814? Sanads attached to treaty of Seaugali 1816 confirm, he did get a lot of hill land but whether this particular hill was also included, can not be said with confirmation.

But maybe the British reverted it back to Pahari raja from which Gurkhas had wrested it, maybe Kunihar, maybe some other. Indeed nothing is known for sure. Even the widely bruited Gurkha antecedents of the fortress are not really based on absolutely clinching evidence. Though quite likely nothing by way of first hand information from either the Nepal or the Gurkha side in the 1814-16 war is available on this point.

The copious British East India company narrative of the war doesn’t mention this fort or stockade at all. Thus there is lots by way of questions and little by way of credible substantiated answers around this little and pretty (but unfortunately as per historical record, not quite “famous”) qila.

It is said that the fort was a sole reminder of Gurkha Empire. But as per its contradiction, certainly at Arki, Amar Singh’s capital during that campaign, there are other
reminders. Also from Himachal Tourism Heritage sites it seems ruins of other forts. It maybe to some extent even those at Jaithak and Malaon where famous battles were fought do exist. But maybe from time these websites were posted these ruins have further crumbled. Interestingly there are some ruins atop hill near Bhojnagar on same mountain where Banasar fort is built. 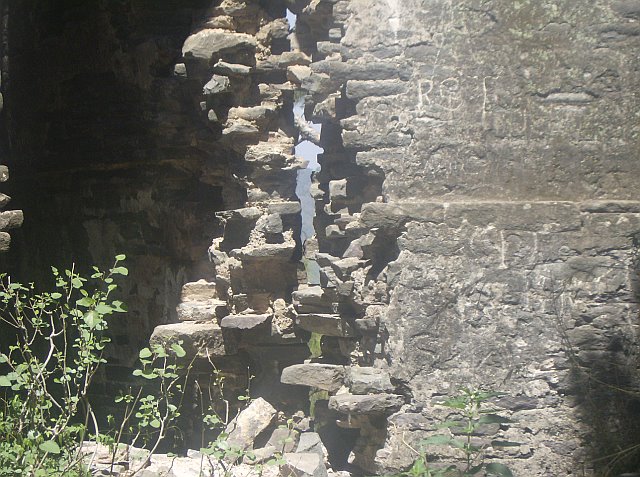 Also another hill, towards Shimla road from fort on which there are some other minor ruins. As per local folklore from this second outpost in old days they used to communicate with this fortress by drums and flares. But of course these are just stories without firm basis. But according to Himachal Tourism site there are similarities of construction between various forts. One other obvious question: what was the strategic significance of this fort? Nothing of importance by itself was on this hill, so it seems it was an outpost of sorts, more defensive perhaps.

Though what happened later after Treaty of Segauli is still unknown but there is also big question mark on the whether this mountain belonged to Raja Patiala, or some hill raja (if so, which one) or was a part of British India .
“The Rajas of the Punjab” by Lepel H Griffin (Griffin’s book on hill Rajas), shows lots of Gurkha-held hill territory going to Patiala, but what it could not decide for sure was, whether this particular mountain went to Patiala.
As per Simla district gazetteers, all of territory on which nearby Dagshai stands did go to Patiala, also of course all of where faraway Simla and it was only much later that British took this area back from Patiala to build these hill stations.

The book “Nepal and the East India Company” by B.D.Sanwal gives an abridged account of the Anglo-Nepal war citing some dispatches from Ochterlony etc. For example a communication from Ocherlony of 1809 (it arose because Patiala was seeking British permission to join Gurkhas against Raja of Nahan/Sirmaur to recover some territory) mentions that Amar Singh Thapa was in that year attacking the many forts of this big hill Raja.

So there is a non-zero chance this particular fort was already there at that time, built by and belonging to Nahan or a raja under him, and Amar Singh merely renovated this garhi after conquest? Also some locals say these outposts formed a ring around Nahan alerting it of impending dangers.

The mystery of this fortress can probably be solved by a perusal of the British sources.
It can also to find primary material in Kathmandu too but that given the desi “penchant” for not caring to keep records seems problematical.