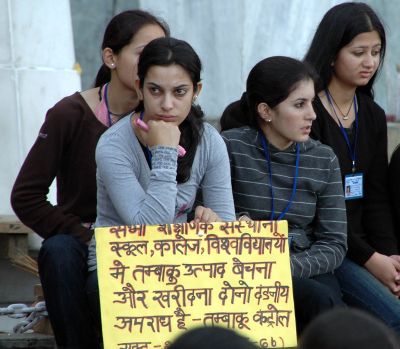 Incidence of cancer is on the rise in Himachal and unless awareness about preventive measures is not acted upon, it could rise further, doctors at the IGMC Regional Cancer Centre here warn.

Rajeev Seam, head of oncology and radiotherapy at IGMC said that the number of cancer patients registered in 1996 was 708 and so far in the current year those registered under the life threatening disease is 1614.

Tobacco and its products, and alcohol are attributed to causing morst oral, throat, lung and food pipe cancers and Himachal too has its share of tobacco related cancers which constitute about 50 to 60 percent of cases detected, said Seam

â€œThe most common cancer affecting females was the gynaecological system, which constitutes 21.61 percent of total malignancies,â€ he says Seam.

Cancer of uterine cervix is the commonest cancer affecting the females in their prime of life, however, this cancer is preventable and if detected early was also treatable, he added.

Lung cancer was the most common malignancy affecting the male population and comprised of 17.50 percent of all malignancies, 26.20 percent of male cancers and 8.91 percent in all female cancers.

Cancers of the digestive system was the next most common cancer in the state, which made up for 16.75 percent in all cancers, 18.22 percent in males and 15.30 percent in females, he said.

In females gall bladder is the commonest of these cancers where as among males large intestine was the most common site.

Head and neck cancers constitute 14.28 percent of all cancers. Lack of pan and tobacco chewing habits were reflected in there Himachal having lesser paitents with oral cancer as compare to other parts of the country.

Larynx or the voice box was the most common site to be involved in head and neck cancers, said the specialist.

Breast cancer in females was the third most common cancer seen in them and constituted 12.75 percent of all cancers detected in females.

To create awareness about the disease the regional cancer center at IGMC plans to hold awareness camps at Mashobra, Shoghi, Dhami and Boileuganj.