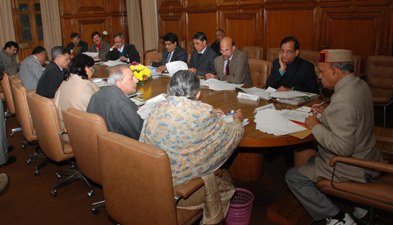 Giving the details Manoj Kumar, commissioner industries said that the single window meet cleared a housing project for employees of MBD Printographers. The MBD group has two units operating and a third one is coming up.

The housing project would come up on 10,000 square meters of land, where about 100 flats for employees of the other units would be constructed, he said.

The biggest proposal cleared was of Rs 95.81 crore of Class Motors for setting up a gear and engine manufacturing unit in Amb-Una. This unit is part of the Sonalika group based in the area and they would be utilizing land bought earlier.

This facility is expected to come into production before March 2010 when the special industrial package for Himachal expires. Tractors are also proposed to be manufactured at this unit that expects to add 525 new jobs.

Mankind Pharma is to set up a second formulation unit at Poanta Sahib with a proposed investment of Rs 37 crore and likely to create 428 new jobs.

Virgo Aluminium is setting up a second unit at Kala Amb with a proposed investment of Rs 42.73 crore, said the industries director. The facility is expected to become functional before March 10.

Design Edge is to set up modular furniture unit at Nalagarh with an investment of Rs 26.50 crore. However the unit would only be given final clearance after it gets the approval from the centrally empowered committee as such units needs environmental clearance.

Proposal of Kamal Oleo to set up a Rs 12 crore glycerine and other acid manufacturing unit at Baddi was also cleared by the single window authority on Monday.

Prominent Hindi newspaper Amar Ujala has proposed to set up a printing facility at Kandhaghat in Solan with an investment of Rs 7.23 crore. The proposal was accorded approval by the high level authority.

Speaking on the occasion, chief minister Dhumal asked that environmental issues and natural resources be taken into consideration while setting up of new industrial units