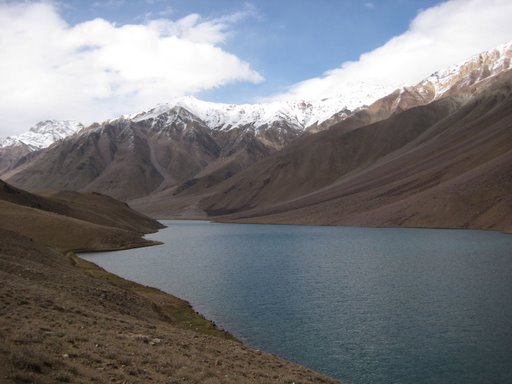 My next stop for tea was a small place called Chattru, 2 tented tea stalls. Even the road transport buses to Losar and Kaza also stop here for lunch. I had a good tea there, again drank some mountain nectar (fresh water flowing thru the mountains) and moved on.

From Chattru, the entire drive and texture of the place started changing. I was passing thru some of the most beautiful river beds I had ever seen in my life. I was passing thru some of the most gigantic rocky mountains, huge. Wilderness at its best, I could see clearly for at least 3-4 miles and that too 360 degree views. That was just out of this world. I had not witnessed this kind of vastness in my life before. It felt as if I’m just nothing in front of this huge vastness. I felt so small in comparison, just like a tiny sand particle. 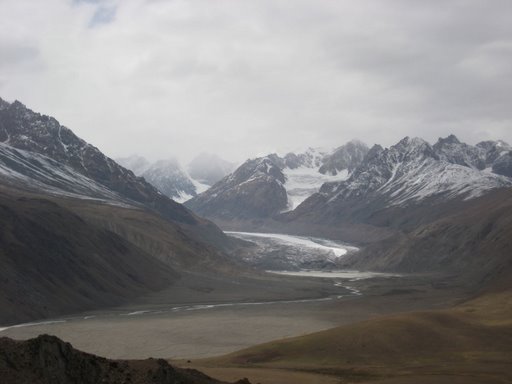 As I move ahead, I started noticing peak of a possibly large glacier behind the right mountain top. Well that was it, few kms on, I read, I was crossing by a huge glacier peak, which is called Chotadara. I was wondering why it is called Chotadara when it is so huge, ofcourse I could only see it from a distance. I’m sure there must be a Baradara (a gigantic glacier near by). I clicked some more pics of this beautiful place. The sight of a glacier peak (when all you hear about is global warming and melting of glaciers) was a divine relief for my visual senses. 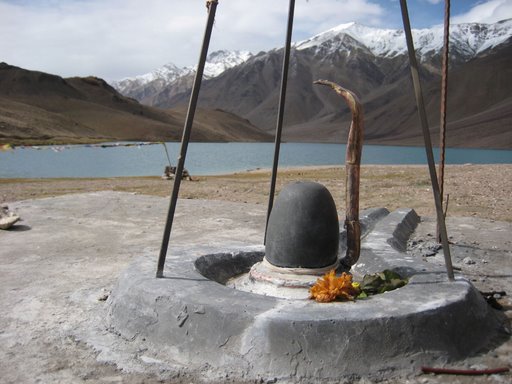 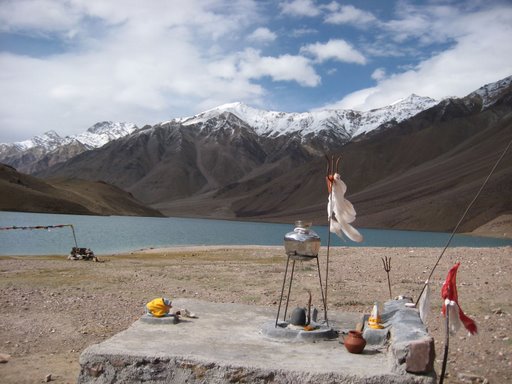 As I moved on, I reached a place called Batal. Batal is known as the base camp for Chandra Tal which is off route for about 13 kms. It was around 2-3pm, I had my lunch at the Batal dhaba and decided to go to Chandra Tal, I had heard great things about this Tal. I checked from Batal dhaba guy about staying at Chandra Tal, the guy informed me, yes, there are a few camps there. I was happy and was deciding to stay at Chandra Tal for that night. As I took the road to Chandra Tal, I was transported into a different world all together. The path (am not using the word road, because it will be insulting to roads) was just good for one car. On one side, I had these slopes of granite rocks, but unfortunately they were loose rocks and were constantly coming down, sharp like knives. And on the other side I had a river gorge, actually a massive river gorge about 200-250 feet deep. It was quite an adventure on that road. It took me around 1 hr and 30 mins to reach to Chandra Tal. But once I reached there, it was a real treat again. An unending blue, crystal clear fresh water lake at a height of about 4300 feet, surrounded by mountain peaks with snow. A sight which is hard to forget, very close to the description of heavens.

There were prayer flags and a small stupa along with a Shiva-lingam; I always love to see this aspect of religion, where one is placed by another, completely in harmony. I guess the world needs to learn from this. I took a walk around the lake, clicked some photographs and then decided to plan my stay there. When I looked around,

I realized that all the camps are already packed up and were being put on pick up vans. I check from these guys and found out that they had been given the warnings to wind up the camps as the weather patterns from last 2-3 days were very unpredictable and there was a possibility of a big snow storm. I too decided to leave with them. 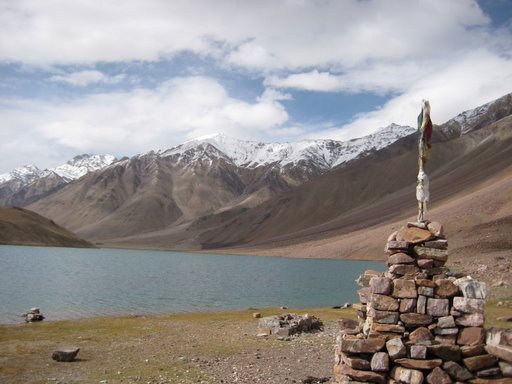 By this time, I was already getting quite tired, driving on that route was quite treacherous. It was already late afternoon and I had to reach Kaza, which was still quite far away. As I started driving back to Batal from Chandra Tal, I thought of driving a little fast (around 30kmph) so that I reach Kaza or atleast Losar before its dark. Remember, this route is very lonely, you barely meet any soul on the route, and throughout the day journey I might have passed thru may be just 3-4 trucks. The entire region is quite safe but the problem is of back up support, if you get stuck somewhere, it will be very hard to get any support and moreover, the entire region is not connected by phones as well.

As I started driving little fast, I noticed that the driving path was quite dangerous as there were very sharp granite knife like stones all over, I was driving very carefully when suddenly I heard a loud noise, my left rear tubeless tyre had been cut. I stopped and saw a 5 inch cut in the tyre, of course beyond repair. The 2 jeeps behind me, which were carrying 14 people each (don’t ask me how?) had to stop. So within 2 minutes, there were around 15-20 people around me and all were helping in one way or the other to quickly change the tyre. Then they request if I can give lift to 1-2 of them, which ofcourse I did. 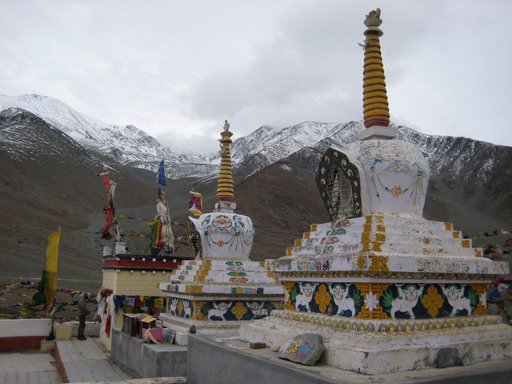 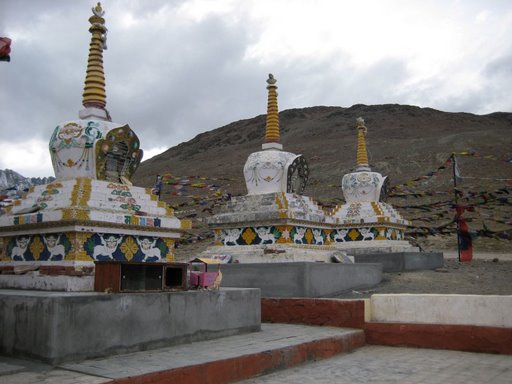 Now, the next mission was to cross the Kunzum La at a height of 4550 ft. As I was driving thru some of the most un-motorable roads in my life (by the way, this whole route is National /State Highway) I suddenly realize that my front right tyre is also on very low air pressure, so, another tyre puncture. Now, I don’t even have a backup tyre. But thankfully, I was carrying an electronic air pump, which works well on tubeless tyres. So, we stopped 3-4 times on the way to constantly fill up air in the tyre.

Few kms of treacherous driving took me to Kunzum La, a heaven in the middle of nowhere. Another example of religious harmony. In the middle of the road there was this Buddhist temple decorated with beautiful prayer flags and just by its side was a Durga Devi temple. It’s a custom on this highway to encircle these temples and pray for a safe journey, by doing that you get blessings of local devtas who are your only protectors at such high altitude lands. So, I stopped by, prayed for my safe journey without any backup tyre, clicked some photographs and moved on. 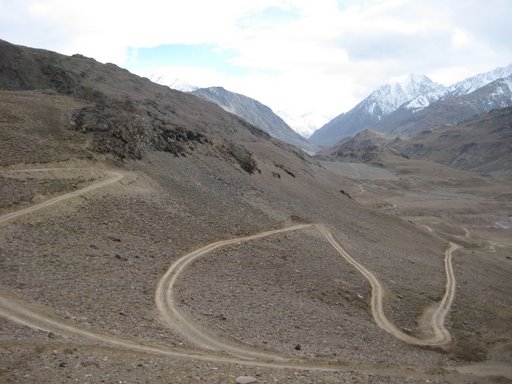 Beyond Kunzum La, the cold desert terrain started. All the mountains are now appearing to be full of mud and sand, the path now became very dusty, by now my car was full of dust inside and outside both. Few kms. down the road, I was greeted by a welcome board which reads “Welcome to Spiti Valley”, what a relief, that finally I was in Spiti. My first major town after Kunzum La was Losar. The sight of Losar after all the muddy & bumpy tracks was a welcome relief again. The first sight of beautiful Tibetan monastic style houses. All with white or mud coloured with Maroon windows and black boarder, just awesome. It was already getting dark when I hit Losar town. Rested for a while, few rounds of contemplation of whether to stay at Losar or head for Kaza which was around 2 hrs. away. Since Losar had no facility to repair the tyre or even an air pressure pump, I decided to move on.

Next 2 hrs to Kaza, I could not see anything on the way coz it was already dark. I finally reached Kaza around 9.30PM and after struggling thru 2-3 deserted rest houses, got a decent guest house called Mandala, which later I got to know, was the best in town. I can’t even explain you, how I spent that night, with no food being served after 9PM, the tiredness of a very long day and acclimatizing of high altitude, I slept like a dead wood but not before taking a refreshing hot water bath, there was a hot water geyser in Mandala guest house. Thanks heavens for that.