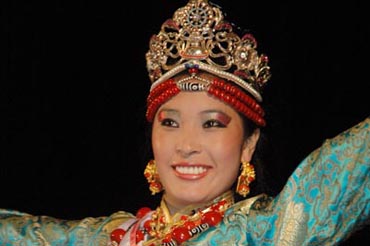 The winners were judged by Dr Rashmi Ramoul, a lecturer at the Government College for Teachers’ Education and Natasha Mendes, a belly-dance teacher from Brasil, elected the winner.

She won over the only other participant 22-year old Jamyang Chentso from Bir, Himachal Pradesh.

Having hobbies like dancing and reading, Sonam came into exile in India on December 2007. Miss Tibet was presented 100,000 rupees and the runner-up with 50,000 rupees.