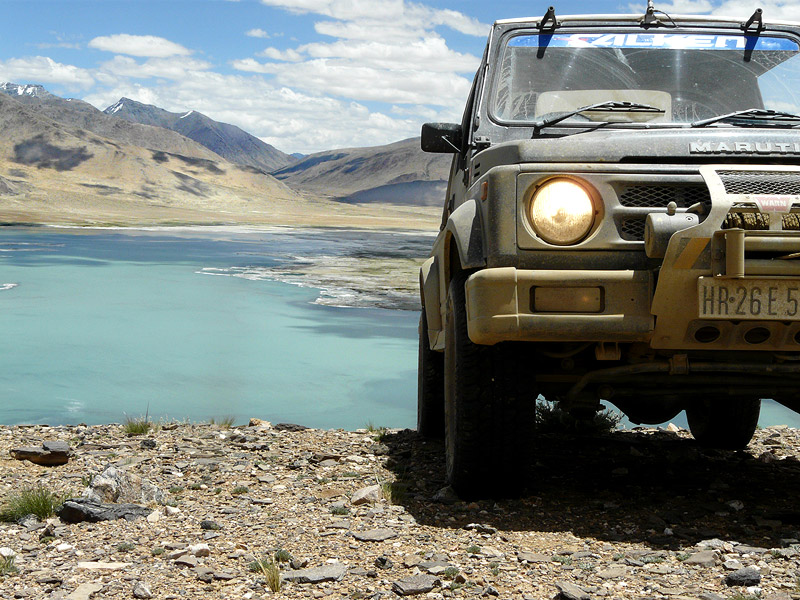 Shimla: Rain battered tracks and snow clogged roads would test both man and machine as the 10th Raid-de-Himalaya gets underway with as many as 132 rallyist having put in an entry for the motor race that cuts across 2150 kilometers western Himalayan ranges crossing 11 high passes en-route.

“Only minor changes to the original route have been made as two competitive stages on day one are unserviceable,” said Manjeev Bhalla, spokesman for the motor sporting event.

Over the 2150 kilometer route that terminates at Leh, 700 kilometers is competitive for which there are 60 four wheel vehicles in the Adventure Trial category, 35 motorcycles and another 37 four wheelers in the X-treme category, said Bhalla.

There are 8 women drivers 3 foreign bikers in the fray, the spokesman informed. The army is putting in 10 teams.

We are keeping a fingers crossed about encountering any rough weather. The forecast for the next three days says that there would be clear skies in the region, said Bhalla.

However, the organizer on a scale of 1 to 10 for x-treme category in terms of difficulty rank this years Raid at 9 scale. The 10th Raid would formally get underway on 2nd Oct and culminate on 9th at Leh. Last year the race had to be terminated prematurely as an early snowfall brought all wheels to a sudden halt.

The Raid route after making some adjustments on day one gets to Manali. On day it the race goes over Rohtang Pass and moves on the snow track over Kunzum La to Kaza, the headquarters of Spiti Valley. Day 3 the rallyists compete within Spiti valley and would be going past Dhanker and Komic monastery and getting back to Kaza for the night halt. Day four the raid would move back over Kunzam La and make its way to Patseo.

From Patseo on Day 5 the race would get to Leh. From Leh the competitors on Day 6 would go to Kargil and on Day 7 would do a circular circuit crossing over the Panzila Passto get back for a night halt at Kargil. The Raid then makes its way back to terminate at Leh on day 8 clocking a run of 2150 kilometes. The highest point which the race crosses is Tanglang la at 17582 feet. In all the rallyists would have to negotiate 11 passes that are over the 13000 feet mark.

Other than the Gypsies and other vehicles from the Maruti stable, there is a Skoda and a Lancer, which could challenge their domination in the Raid. Winner of more than one Raid Suresh Rana would be tested against Atikur Rehman from Guwahti (Assam) who tries out a Skoda in the rough Himalayan tracks.

If he gets past day one, he can be counted as a serious contender for the title as his vehicle is equipped with world class rally gear, said Dheeraj, a rally enthusiast.