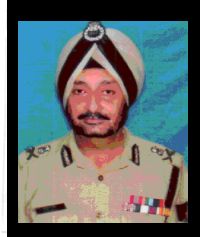 The Himachal government today notified the appointment the senior most state cadre police official GS Gill as the new director general of police.

Home secretary PC Kapoor said, â€œa notification regarding appointing Gill as the new DGP of state has been issued.

Going strictly by seniority norms, the government accepted the recommendations of a three member committee headed by the chief secretary that was constituted to finalize the name for the new DGP.

Gill, a 1974 IPS officer, was earlier repatriated from central deputation where he was serving as an ADGP with the Border Security Force (BSF). With the BSF, he had served in the Jammu and Kashmir also.

Gill was also being tipped to be appointed as director of BSF before he decided to rejoin the state cadre and take command of the police force.

The top police position had fallen vacant after Ashwani Kumar, the earlier DGP, was made director of CBI about a fortnight ago.

Sohan Singh another 1974 IPS officer was made the additional charge of DGP after Kumar left to take up his assignment at the prestigious agency.