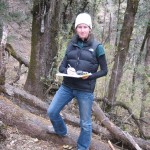 I recently emerged from the Great Himalayan National Park (GHNP), where I lived for two months while carrying out biological fieldwork about the impact of local villagers on pheasant populations. As an American ecologist, I was intrigued by the eco-development implemented in GHNP and thus initiated a project to acquire an Indian perspective on the roles that local communities play in conservation. So, with support from the Forest Department, the Wildlife Institute of India and a U.S. Fulbright Scholarship, I launched in to a two month, first-hand experience of rural life that opened my eyes to the challenges faced by village communities and ultimately revolutionized the way I view conservation biology. 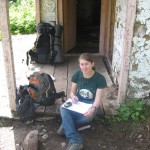 From April to May 2008, I backpacked through GHNP, camping for 5-day trips at a series of study sites with a team of three local men. Each day we rose before dawn and listened for Western tragopans and koklass pheasants, recording malesâ€™ territory calls that rang through the valley while the rising sun painted the sky. In the mornings we walked trails and counted Himalayan monal as they swept down the hill slopes around us. Every day, my assistants and I marveled at the number of pheasants in the forest, and after eight weeks of data collection, our impressions were confirmed: Western tragopan, koklass pheasant, and Himalayan monal have doubled in abundance over the past decade. 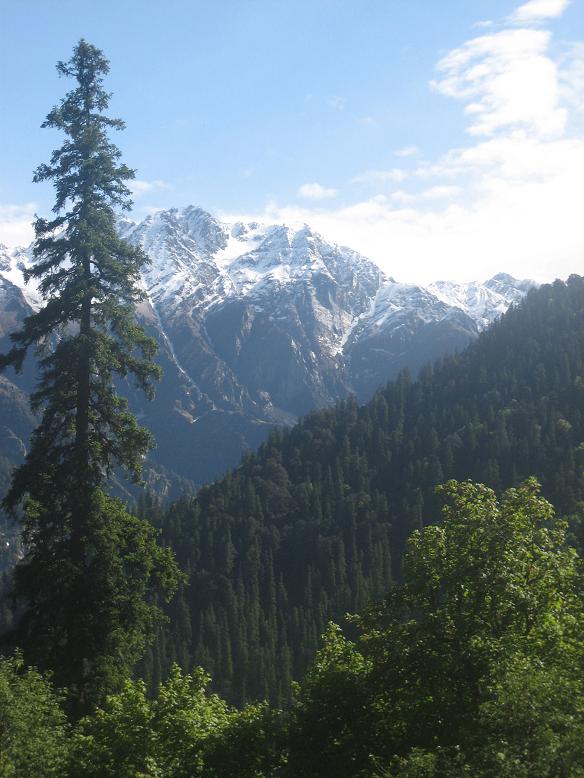 By scientific terms, GHNP management is a success. Pheasant populations and forest habitat that previously showed signs of decline and degradation now appear to be recovering. Yet raw numbers do not share the stories of local villagers, who play a significant role in the areaâ€™s ecosystem by grazing livestock, collecting medicinal and edible plants and hunting. I was fortunate enough to live in the village of Kharongcha between my research excursions into the park, and it was my experiences with people during these days of â€œrestâ€ that enlightened me to the human reality behind my pheasant data.

Perched on a mountain slope, Kharongcha is located in the GHNP Ecozone near the park boundary. During my stay, I joined the thirty residents in walking two hours and 8km along a winding footpath to reach town, which was our closest source of groceries, medicine and public transportation. The villagersâ€™ isolation prevents them from accessing well-paying jobs, and their financial struggles are reflected in their tattered clothing, meager meals and simple lifestyle. From the window of the mud and wooden house in which I lived, I watched the hardworking residents of Kharongcha wrestle daily with the land for survival, pulling grass from the fields for their cows, pushing goats and sheep along narrow pathways to graze, chopping wood for their fires, and plowing thick soil to plant potatoes.

From March until May, I often met exhausted villagers who had spent the day scouring the steep forests of GHNP in search of moral mushrooms, termed â€œgucchiiâ€ in their local language. Many villagers collect the vegetables within GHNP for income because they are easy to transport and can be sold for a high price in local markets. Unfortunately, this livelihood impacts flora and fauna; as they scour the forest floor, the gatherers trample vegetation and disturb wildlife, most noticeably the pheasants that breed during the harvest season. Gucchii collection was previously identified as the most likely cause of the declining Western tragopan population within GHNP. 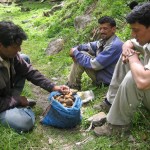 As I spoke with gucchii collectors, I quickly learned that the task was neither easy nor risk-free. Sometimes their sacks brimmed full with the cream-colored vegetable by evening, but frequently they remained empty. I heard descriptions of the dangers these people faced – bears, leopards, sheer cliffs and unpredictable weather – and tales of those who failed to return from the forest alive. In recent years, new threats have also begun to challenge villagers. In 1999, the Forest Department legally banned livestock grazing and the collection of plants inside GHNP. Around the same time, the population of gucchii began decreasing, possibly due to climate change, over-harvesting and/or a natural fluctuation in abundance. The villagers voiced their concerns to me that gucchii was no longer profitable for the masses, and that many people now desperately seek other sources of income.

My interactions with the villagers made me realize that conservation in GHNP is not only a scientific question, but also a social one. Fewer gucchii collectors within the park have led to less environmental disturbance and the resurge of pheasant populations. Yet it has been the local people who have paid for this shift. Although the Forest Department has attempted some eco-development within the Ecozone, none of the villagers I spoke with had felt its effects. 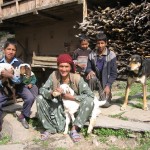 There is a conspicuous disconnect between the local people and GHNP conservation. Villagers have historically played an integral role in the forest ecosystem; it is only fair that we cultivate and encourage their preservation just as much as we are doing for pheasants. My conversations with local people revealed that many of them greatly value the wildlife around their homes and understand the importance of environmental preservation.

If the Forest Department, Indian government and NGOs can provide local people with sincere support and education, they can learn to embrace conservation as a tool to improve their impoverished conditions. Only then will pheasants and peasants be free to wander the hills of GHNP in harmony.