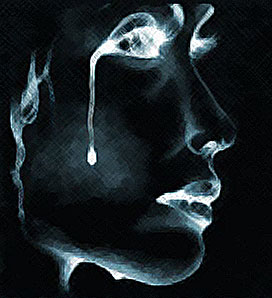 She stepped in the house in red bridal saree and gold ornaments. Her hands were looking very pretty in henna tattoos and red chuda. She lifted her saree to take step ahead, her silver bichuae and anklets shine over her maroon henna tattoos on feet. As she looked up from her veil, we saw a beautiful face beautified with gold nose ring, mang tikka and big gold ear rings, red dot on forehead and red lip-colour made her lips look like red rose petals. The red saree, make over and ornaments complimented her fair complexionâ€¦ This is Sita on her wedding day.

This appearance of hers stroke my mind today, when I met her after five years of marriage. Now, she is a widow, her husband died a year back in an accident. She lives with her parents-in-law and her son, Gopal.

She walks down the street in white saree, there is no other colour to be described. She appears pale and lifeless. She lives with no hope from life except her son, who is very naughty and unaware of the grief of his mother because of his innocent age. She has hopes from him, but we donâ€™t know whether he will look after her or show her the way to old age home.

Sita was a very cheerful and lively girl whose presence brought a life into the talks with her satiric comments and beauty. Today, she passes by without being noticed by anyone. She stands isolated in a corner where darkness hides her presence.

With a heavy heart I walked on the shore of the river, where I met Thakur Ranjeet Singh, the brother-in-law of Sita, the same loud character of the village whose wife died few years back with cancer. He is in his late fifties but thinks himself to be a dandy of thirties. His family and relatives are looking for a bride for him, because they and even he himself thinks that to kill his loneliness he should go in for second-marriage.

I greeted him and compared his life after death of his wife with the life of Sita. Is his loneliness greater than hers?

She is considered unlucky when seen in morning and is asked to stay at the back on any auspicious occasions. But we donâ€™t see any change in the lifestyle of Ranjit.

Can anybody answer why there is â€œSatiâ€ for ladies, why donâ€™t any men burn themselves alive for their wives? Why no color is removed from their lives? Why arenâ€™t they forced to live a life of gloom by the society? Why arenâ€™t they restricted from non-vegetarian food? The list of â€œWhysâ€ is stuck like a chewing gum in my mind but I see no answer to these questions.

Here, Iâ€™m not asking you to answer these questions of mine but to consider a widow as a human being with a heart – who love colors, who feels happy after loud laughters and also feel lonely at the hardships of life. If we consider a second-marriage right for Ranjit then why not for widows like Sita. Even they have the right to start their life again.

There might be one or many such Sitas around you, please think about their life without a partner and try to bring colors back to their lives. The issue is not of second-marriage but of bringing happiness in their life.