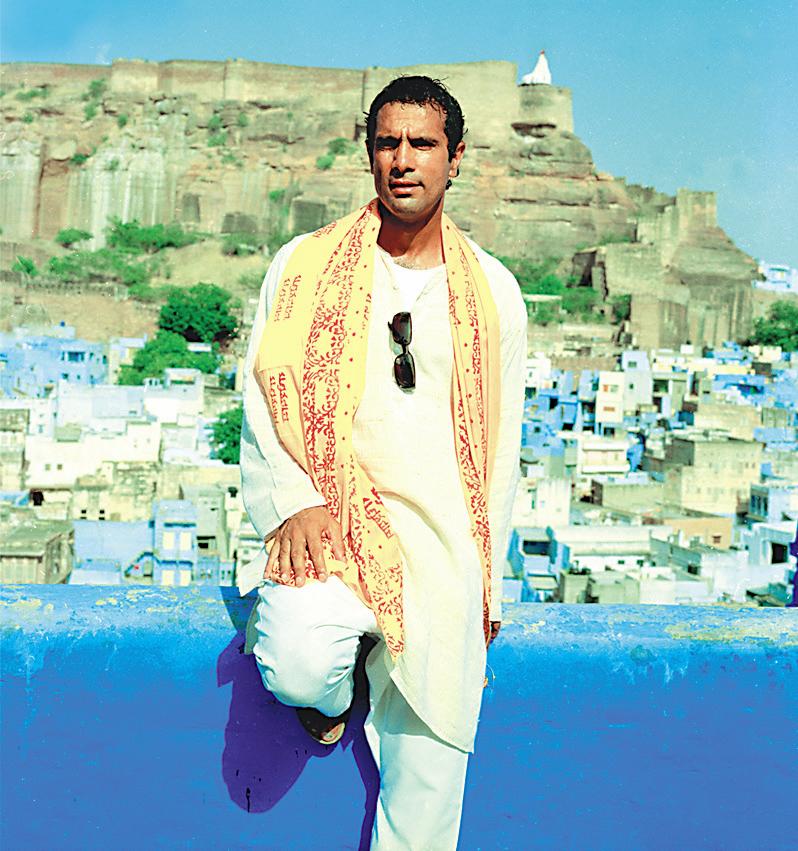 In a wide-open mountain landscape in Ladakh, a vast monolith of silk hangs between two stone pillars, its whiteness splashed bloodred. A turbaned warrior escapes his captors by racing up the staircase of the Jantar Mantar stone observatory in Jaipur, hurling himself into space.

Soldiers enter a darkened palace hallway in search of their companions, and look up to see their dead bodies shaped into a bloody chandelier of limbs, dangling high above their heads. The images that director Tarsem Singh has crafted for his latest globe-trotting epic, â€œThe Fall,â€ stay with the viewer long after the lights come up.

Shot on location in India, South Africa, China and around the world, “The Fall” is a fantasy fable packed with images of beauty, horror and poetry. But it also has a human side. Roy Walker (Lee Pace) is a silent-era

Hollywood stuntman confined to a California hospital bed. In pain from a broken back, and depressed that his girlfriend has just deserted him, Roy can only lie there thinking up ways to commit suicide. He is completely unprepared, then, for the appearance of Alexandria (Cantica Untaru), a spry young girl who is also in the hospital for a broken arm. Alexandria, bored and in search of a playmate, plops down next to Royâ€™s bed and demands he tell her some stories to pass the time. Roy spins an elaborate and whimsical (and sometimes horrific) tale, which Tarsem illustrates with his usual fantastical visual flair.

Singh laughed when an India- West reporter compared it to “The Wizard of Oz.” “Iâ€™ve never seen â€˜The Wizard
of Oz!â€™” he said. “At Bishop Cotton School in Shimla, we used to have a teacher who told us these fantastic stories. She would use our body language to tell us stories that were so over-the-top ridiculous. She would mix the Indian Robin Hood, James Bond and Richard Nixon in these wild scandals. We were mesmerized!”

“Itâ€™s taken 17 years for me to shoot this film, in at least 24 countries. When I finished it, everybody wanted to release it, but nobody was as behind it as I wanted them to be,” he said. It was ultimately picked up for distribution by Roadside Attractions, a quirky independent company whose titles include “Super Size Me,” “Teeth” and Independent Spirit Award winner “The Road to Guantanamo,” and will hit theaters in May.

Despite its visual splendor, “The Fall” makes some of its greatest emotional impact in the scenes between Roy and four-year-old Alexandria. Untaru, with her apple cheeks, brown curly hair and an adorable gap where her front teeth should be, is a born charmer, and her interplay with Pace is warm, fresh and organic.
Her performance is so natural that one would assume Tarsem has children of his own, because he instinctively knows how they talk and act.

“I donâ€™t have children. I have lots of nieces and nephews,”Tarsem told India-West. “Iâ€™m ready, my girlfriendâ€™s not!”

Tarsem and his team literally searched the world for just the right actor for the role of Alexandria. “I didnâ€™t know if it would be a girl or a boy. I would send out people to schools and have them tell stories and video the childrenâ€™s reactions. I came to realize that after about four years old, they were already â€˜actingâ€™ as opposed to acting naturally,â€ he said. When Tarsemâ€™s scouts found Untaru in Bucharest, Romania, they knew they had found their leading lady. â€œCatinca was six, but she didnâ€™t speak English,â€ he explained. â€œI figured, â€˜ah.â€™ If she doesnâ€™t speak English, then it buysme another two years.â€

With kind permissions from India West.