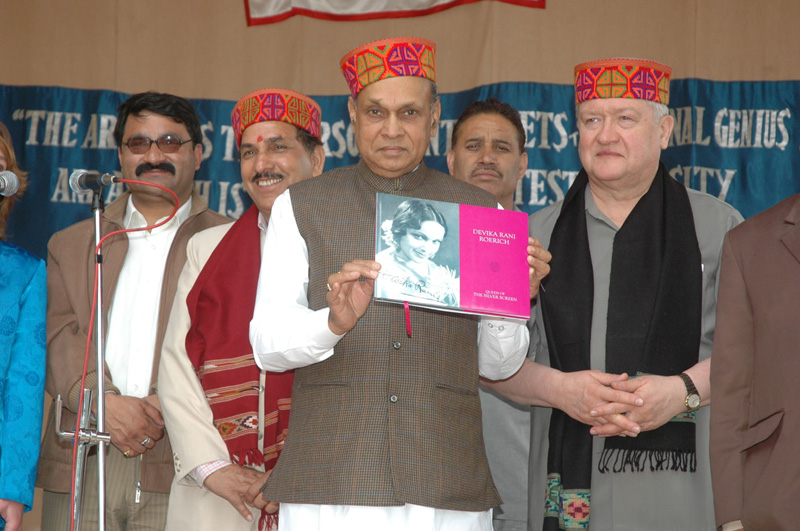 Delivering a speech on the occasion of Birth Centenary Celebration of late Devika Rani, celebrated by the International Roerich Trust at the Naggar’s Art Gallery Prof. Dhumal confirmed Hema Malini’s proposal of a dance training school in Himachal Pradesh.

It was the birth centenary celebrations of late Devika Rani, the great grand-daughter of Noble Laureate Rabindra Nath Tagore. She was also the first female actor who entered the male dominated film industry. A byproduct of the at the Royal Academy of Dramatic Art(RADA), she apprenticed under Elizabeth Arden. A pioneer of the silver screen, she introduced many actors of caliber to the film industry. Later on, she married Svetrolar Roerich, an eminent Russian painter who had settled at Naggar in Kullu valley. She was also bestowed with prestigious Padma Shri and Phalke award. Naggar and the gallery have become famous on the world map for its celebration of art, beautiful surroundings and historical importance. Even Nicholas Roerich spent his life there only. The gallery has thoroughly promoted art and given space to upcoming artists to exhibit their art work.

Russian Ambassador V.I. Trukinikov also paid his tributes to the first lady of Indian Cinema while Peter Deplay, the grandson of late Devika Rani shared his memories of the yesteryears. ‘Queen of the Silver Screen’ compiled by Dr. Alena Ducter of the International Roerich memorial Trust was also released by CM on the occasion.