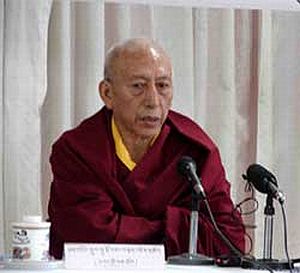 DHARMSHALA: Conference on mass movement of the Middle-way approach, which seeks autonomy rather than independence to resolve the issue of Tibet, was organized here on Saturday by a group of voluntary people of Tibetan community.

The First Conference on Mass Movement of the Middle Path at Yongling School was presided over by Prof. Samdhong Rinpoche Prime Minister of Tibetan- Govt.-in -Exile as the chief guest .The two-day conference, initiated by a group of voluntary people, mainly consisting former and current members of Tibetan Parliament, intends to create better understanding of the approach among the general Tibetan masses.The newly initiated conference intends to reinforce the “Mass Movement of the Middle Path” by creating better public awareness among Tibetan masses that largely approve the middle-way approach proposed by His Holiness the Dalai Lama in resolving Tibet issue.

Describing the middle path policy a more realistic approach in an increasingly globalised world, Prof. Rinpcohe insisted general Tibetans to have a clear and better understanding of the approach and applauded the organisers of the conference for their initiative.Rinpoche said China should not have problem resolving the Tibet issue on the basis of the proposed middle way approach. “Through middle-way approach, we are not seeking independence rather those minimum rights that are protected under the People’s Republic of China’s Constitution and its Law on Regional Ethnic Autonomy,” Prof. Rinpoche said.”In this case, China only needs to have sincere will and courage to fully implement those provisions as enshrined in its Constitution and the Law on Regional Ethnic Autonomy Law to resolve the Tibet issue,” he said.

“If China is in a position to fully and sincerely implement those provisions, for Tibetans, situation inside Tibet would not be worse, if not better, than under the Tibetan administrative situation prior to 1951,” Rinpoche told the conference attended by some 400 Tibetans. “In our opinion, middle-way is the more pragmatic and attainable approach to resolve our issue,” Prof. Rinpoche said. He, however, noted that the decision to pursue the Middle-Way Approach policy was democratically adopted and insisted general masses that approve the path to stand by it with firm conviction by having proper and clear understanding of the approach.