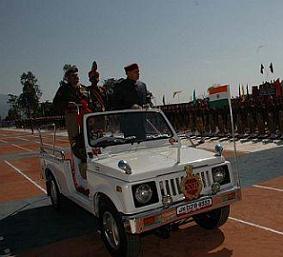 JAWALAMUKHI: Prem Kumar Dhumal, Chief Minister presided over the Passing Out Parade and Oath Taking Ceremony of SSB contingents at Sapari near Jwalamukhi in district Kangra of Himachal Pardesh today. He inspected the passing out parade and took salute from the passing out SSB contingents in an impressive passing out Parade ceremony. He gave away prizes and mementoes to the outstanding contingents for their extra-ordinary training skills during their training period at Sapri Training Centre besides various other extra-curriculum activities. He congratulated the contingents.

Chief Minister commended the services being rendered by the SSB contingents on the frontiers of the nation. He exhorted the contingents to rededicate themselves to the services of the nation and depressed section of the society. He hoped that with the strengthening of the Battalion the security network of the nation would get strengthened further and discipline maintained at all level. He said that State Government would always be prepared to extend all its cooperation to SSB in carrying its activities.

. Dhumal said that H.P. happens to be the first State in the country which had granted an ex-gratia of Rs. 3 lakh to the soldiers hailing from the State killed in action while para military personnel killed in action were also being given an ex-gratia grant of Rs. 1 lakh. He said that State Government was committed towards the welfare, relief and rehabilitation of the serving and ex-servicemen and had always been sympathetic towards all their genuine needs. He said that the soldiers of the State had brought laurels to the State and the country with their courage and bravery acts. He said that best package was being made available to the families of the ex-servicemen besides making them available re-employment avenues. He reiterated the resolve of the State Government to protect the interests of serving soldiers and ex-servicemen and their wards and make them all promotional and other avenues available for their socio-economic upliftment. He said that the State was proud of its soldiers who had brought name and fame to the State. Dhumal appreciated the skills developed amongst the SSB recruits during their training period and hoped that every contingent would be able to discharge their duties with dedication and sincerity which had been taught to them during the training period. He said that the SSB had been rendering yeoman service in guarding the national boundaries and lending its helping hand to 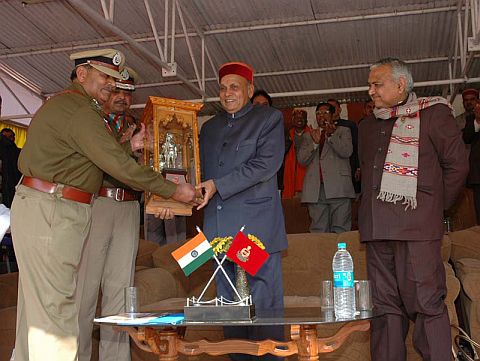 civil administration during emergency and natural calamities like carrying out relief and rehabilitation to the affected people. He said that SSB believed in nation building and an organization which had connected the people residing in the inaccessible areas with the mainstream. He said that the medical and veterinary services being delivered by SSB para medics had helped in making available immediate health facilities for which people of those areas always remember the SSB. He said that it had been carrying out commendable duties in odd hours also.Chief Minister assured all State help for strengthening the SSB training centre at Sapari. He hoped that the Centre would be equipping more law and order maintaining forces with modern skills which would help in dealing with anti-social elements in a more effective way.

Shri R.S. Pathania, DIG, SSB welcomed the Chief Minister and apprised him of various activities being undertaken by Sapari Training Centre of SSB. He said that contingents from different States of the country had passed out successfully. He said that Centre had imparted training to 9,624 persons from different forces.I . G B R Bhardwaj, Commadent v. p. Singh and Deputy Commadent M M Sunderyal also present on the occasion.