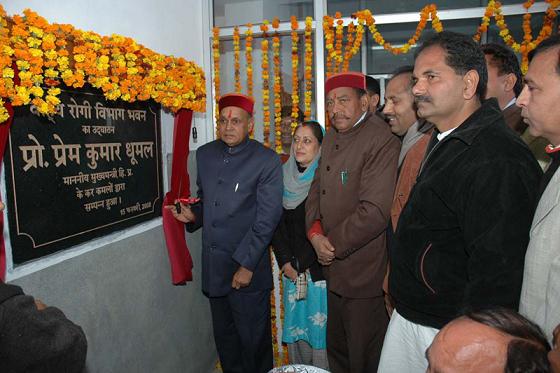 HAMIRPUR (HP):Jangel Beri will be the headquarters of newly sanctioned IRB-4. An announcement to this effect was made by chief minister, Prem Kumar Dhumal during a chat with reporters at Nadaun kaswa of the district today. The chief minister was at Nadaun to start his winter sojourn of the lower hill areas of the state comprising of the districts of Hamirpur, Una, Kangra and Chamba from today. Dhumal will lay foundation stones of various schemes and address thanks giving rallies during his ten days tour of these areas.

Dhumal said that the main aim of raising IRB-4 at Jangle Beri was to compensate the loss that was caused to the area during the past Congress regime. He alleged that the Congress had acted in a partial manner and for that it paid big price by losing majority seats in the lower hill areas of the state.

Dhumal said that the work for the raising of new battalion would be started soon.

In his past tenure during 1998-2003, a battalion of IRB-2 was also raised by Prof. Dhumal at jangle Beri but that was later on shifted to Sakoh in Kangra district by the Congress rulers. The BJP raised hue and cry and even resorted to various agitations but without any results.

In all 1000 posts of different categories will be created in the battalion and added that out of total strength, 963 rank posts. 33 wireless staff and 11 posts of medical and ministerial staff will be filled in the battalion. The central government will also provide Rupees 8 crore as capital cost for meeting the infrastructure expenditure and added that it will be in the shape of grant-in-aid from funds allotted under security related expenditure.

Moreover, all the vacancies in the battalion will be filled within two years period by January 2010. He said that State Government would send quarterly report to the Centre on the status of the battalion.

Dhumal said that training to the recruits will be imparted as per the model syllabus so as to increase the operational efficiency of the battalion and added that around 250 constables would be trained as special task force with special capabilities to work in terrorist /militant affected areas. He said that a selection board comprising representatives of central police force would be constituted to make all recruitments for the battalion and entire recruitment process will be completed with two years.