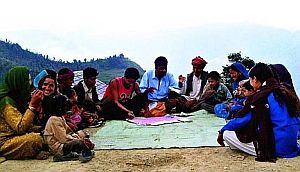 More than 2/3 of total area in Himachal Pradesh is categorised as forest land (i.e. land under the management of State Forest Department). The local people have largely been emotionally alienated from the forests due to a history of commercialised approach to forestry.

Commercialised medicinal and aromatic herbs, found in most high altitude areas of the state, are amongst the most threatened forest resources. 21 of the 44 commercially traded plant species in Himachal Pradesh are on the red list of the IUCN which comprises of species facing the threat of extinction.

These species are traded mostly in the root form which is also a substantial part of family incomes in middle and higher Himalayan villages. Their depletion means loss of livelihoods and richness of biodiversity.

Every summer, the people of Charda Panchayat in Chamba district cross over the mighty Pir Panjal range (middle Himalayas) to Lahul in order to bring back-loads of dried herbs. It is risky to make these trips as accidents are frequent but still people go as there is no other way for them to repay the local trader and money lender. 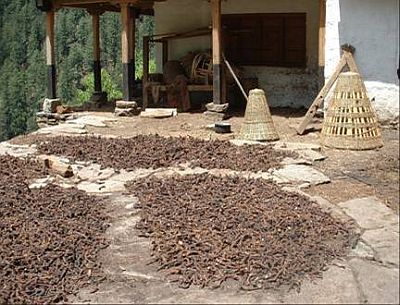 In 2006, Lok Vigyan Kendra (LVK), started working in the Charda Panchayat to help the local community to find solutions to these very issues. After the initial discussions regarding the initiative, only one village (out of the 11) agreed to collaborate with them on this initiative.

LVK team helped the Kut Batoa village of 11 families to rehabilitate 1 hectare of this area with a specie of herbs, Valeriana wallichii, that was abundant there once. Fortunately, the herbs planted in July 2006 showed excellent survival results.

The pilot initiative in Kut Batoa encouraged the villagers of Charda Panchayat, Mahua, and others. However, similar to other crops rains play an important role in the survival of the herbs.

Along with the flourishing of planted herbs in Kut Batao, the area of plantation also increased, but many more challenges were to be faced by LVK and people, like facilitating community based mechanisms, ensuring the Kut Batoa community and this effort in conservation is given legal recognition by the Forest Department and also to bring about reform in functioning of Forest Deptt. in support of forests being managed collectively by local villagers and government.