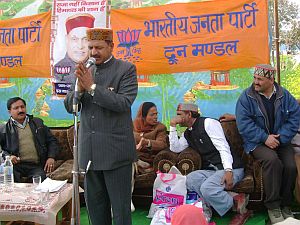 KUMARHATTI: There were plans to develop Baddi, Barotiwala and Nalagarh in a systematic way so that people of areas would get all basic amenities. This was stated by Dr. Rajiv Bindal, Health Minister while addressing a gathering during Doon BJP function at Baddi today.

He said that the Congress government had failed to utilize the industrial package announced during NDA government in 2003. The Congress failure to plan the things in right way had caused serious problem for area people. Now Prof. Prem Kumar Dhumal led state government was making efforts to undo Congress mistakes, he asserted.

He said that benefit of increasing of minimum daily wages from Rs. 75 to Rs. 100 would also be available for unskilled labour engaged in private sector. The most of manpower employed in Solan district units were skilled labour hence decision to hike wages would benefit over 5-lakh families, he maintained.

Dr. Bindal informed that the state government has fixed Rs. 2400 crore annual plan for 2008-09 .This budget allocation was more than Rs 300 crore from the outlay for current year. Besides this the central government has also allotted Rs. 12.50 crore to set up Indian Reserve Battalion in state, he said. The setting up of this Battalion would help state youth in great way, he pointed out.

To improve health service in Baddi belt and to provide timely quality medical treatment to industrial workers the government was focusing to set up ESI hospital at Baddi, he remarked. The efforts were on to start construction work on hospital soon, he added.

Speaking during occasion, Smt. Vinod Chandel, the party sitting MLA from Doon said that the state government decision to provide 50 percent reservations to female in panchayati raj system would help to empower women rights in society. The BJP historical decision to give 33 percent reservation to women would help to enhance women role in party origination structure, she said.

Later Dr. Bindal held a meeting with industrialists. He also visited the Primary Health Center and Ayurvedic dispensary at Baddi. He also paid a visit the site selected to set up ESI hospital.