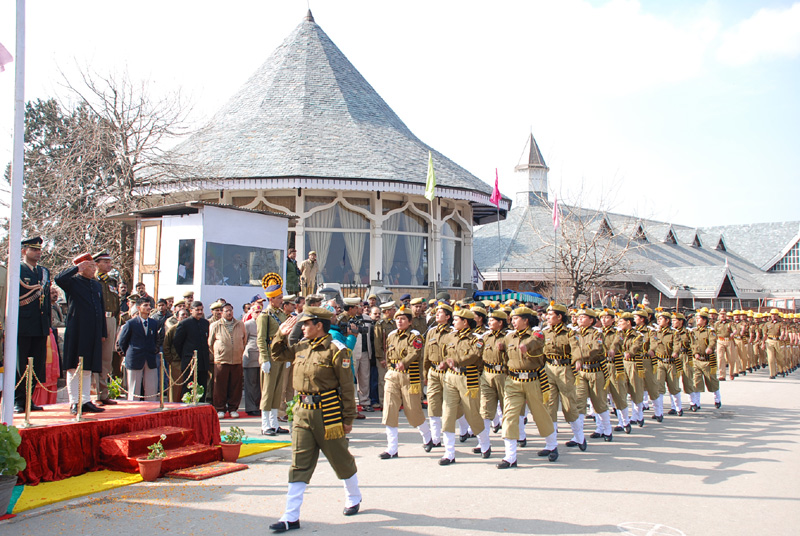 59th Republic Day was celebrated with great enthusiasm and fervour throughout the State today. Functions were organized at State, District, Sub-Divisional and Tehsil-level to mark the occasion. Unfurling of National Flag, March-past by the contingents of Police, Home Guards, ITBP, NCC and cultural programmes were the main attractions of the day long celebration.

Governor unfurled the National Flag and took salute at an impressive March-past presented by the contingents of Police, ITBP, Home- Guards, Army Regiments, NCC and Ex-servicemen. He also inspected Guard of Honour. N.K. Sharma, ASP Commanded the Guard of Honour.

At Kangra, Thakur Gulab Singh presided over and visited War Memorial raised in the memory of those warriors who laid down their lives during wars and operations after independence.

Ex Ministers Shri Vidya Sagar and Vikram Katoch and others were present.

Presiding over the function, Ravinder Singh Ravi, Irrigation and Public Health Minister said that present Government was committed for the welfare and upliftment of women in the State and added that Government had announced 50 percent reservation to women in PRIs and local bodies elections soon after coming to power in the State. He said that the govt had also enhanced the daily of daily wagers from Rs. 75 to Rs. 100 from January, 2008 which would benefit about five lakh daily wagers in the State. He also paid tributes to the martyrs and freedom fighters on the occasion.

He also honoured Prakash Chand and Sitawati, senior writers for their literary writings on the occasion.

Narender Bragta, Horticulture Minister said that Kinnaur district has made its identity in the field of agriculture. He informed that new root stock from other countries would be imported and distributed to the farmers of the State.

In District-level function at Nahan, Ramesh Dhawala, Food and Civil Supplies Minister unfurled the National Flag and took salute at an impressive march-past presented by contingents of Police, Home Guards and NCC.