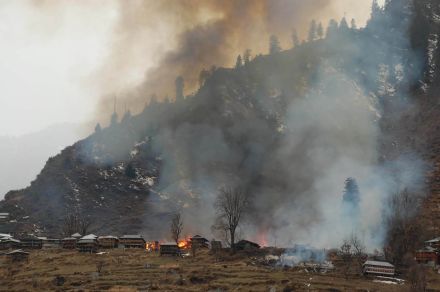 Shimla: What centuries of hostility could not do to Malana village, a devastating mid-winter inferno did so in half a day on Saturday.

Shrine of the all powerful Jamlu Devta, god of the Malana people, along with over half of the high altitude village was reduced to ashes.

Three other temples of Atharah Karadu Devta and of Renuka Mata were also consumed by the fire. 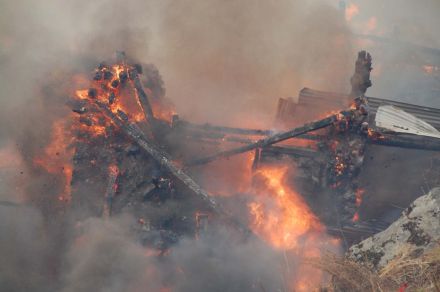 Firemen, villagers and volunteers fighting the blaze, had to break down houses to make a fire line that helped to save the upper half of the village.

About 650 people belonging to 150 families that were living in 120 houses have been rendered homeless to face the cold in sub-zero temperatures in the village located at an altitude of over 10,000 feet.

As the fire was brought under control, it began to snow that has added to the misery of the fire stricken victims.

Chief minister Prem Kumar Dhumal who tried to reach the village on foot had to abandon the effort for heavy snow prevented uphill movement, 5 kilometers short of the village.

District magistrate Abhishek Jain, who is supervising relief said, “It is extremely difficult to provide relief to the fire victims in Malana but despite the problem of accessibility we have been able to stock up a month’s ration in the local public distribution shop.”

“We are trying to persuade the villagers to move lower into the valley where it would logistically be easy for us to provide relief, but the people are not willing to do so as they highly value the place and whatever is left of their belongings,” he said. 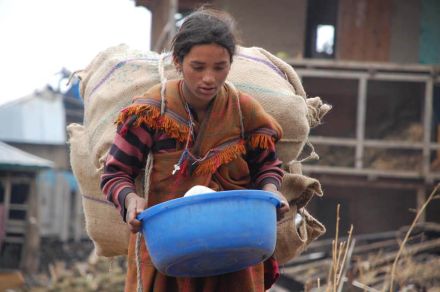 Dhumal has announced a relief of about Rs 3 Cr, which includes Rs 1.82 crore for procuring timber to reconstruct the houses as the High Court has banned all rights of people on timber from local forests.

In a month, this is the second village in Kullu valley that has got burnt down.

Over the centuries, the isolation of Malana helped to preserve its unique socio-cultural practices.

For many years after independence Malana continued to exist as a state within a state, as the rules of Indian government were simply not accepted by the people. The village has been a curious subject of study by researchers and documentary filmmakers.

The village’s crude democratic practices has often been claimed to be a lifestyle of old community living, no more existent in modern times.

The villagers even trace their lineage to the Greek armies of Alexander the Great, who were left behind after his invasions of north India in 326 B.C.

Faced with continued hostility and in order to protect their culture, ancestors of Malana are said to have retreated into this inaccessible valley across the Chanderkhani pass in Kullu valley.

Besides researchers, the village attracts hordes of foreigners. ‘Malana cream’ the brand dope processed by the villagers is considered to be one of the finest marijuana available anywhere in the world. Sources claim that it is also one of the highest priced dope in the international market.

In recent years, government agencies have tried to dissuade the people from growing, processing and trading in the contraband, but have failed to eradicate marijuana farming.