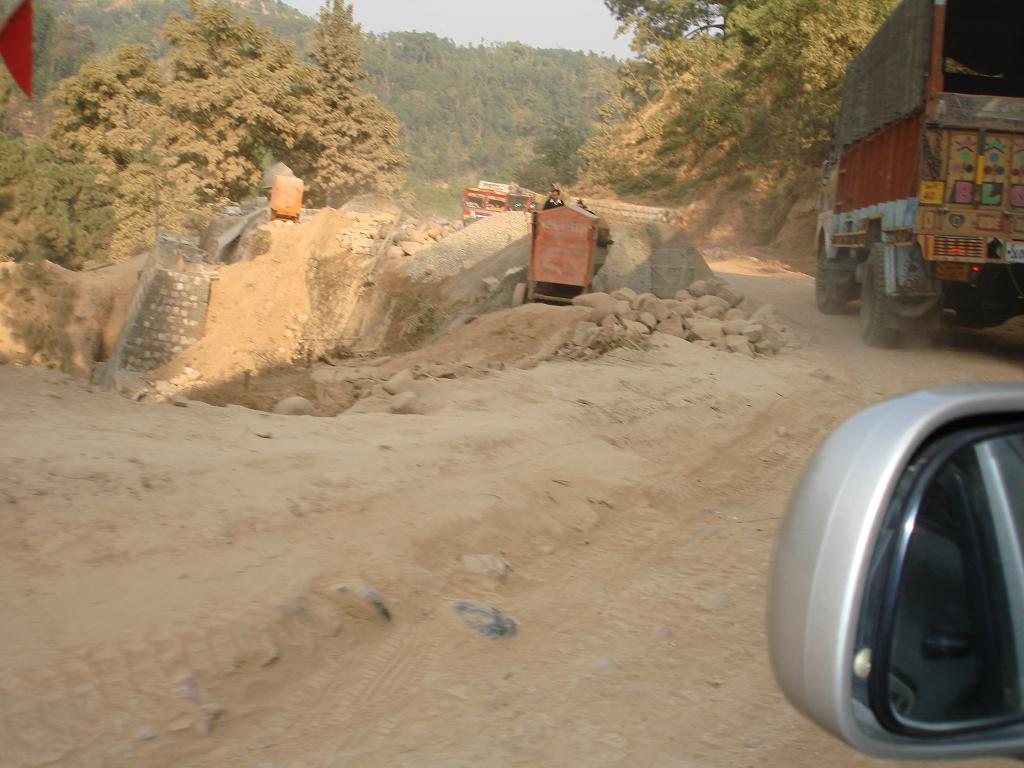 Palampur: Himachal Pradesh government is worried over the extensive damage being caused to national and state highways by the trucks over loaded with cement, clinker and other construction material. Official sources revealed that the trucks carrying cement, clinker and steel are openly flouting the provisions of Motor Vehicle Act. and carrying load more than the prescribed limit of nine ton resulting in damage to roads in the state.

Mr. Prem Kumar Dhumal, Chief Minister who had recently taken over the reins of the state had taken serious note of it as repair and improvement of state roads was one of the top priority in the BJP manifesto. He had already asked the concerned officers to initiate necessary steps and save the state roads from further deterioration and implement the provisions of Motor Vehicle Act in the state effectively.

In the absence of any stringent law to deal with this menace, the State Public Works Department have found itself helpless and damage to roads is going on unabated. The Kalka- Shimla (Hindustan Tibet Road), Kiratpur- Manali, Shimla- Kangra and Pathankot â€“ Mandi national highways of the state are the worst affected where almost all patches of roads have deep potholes and developed cracks making driving very difficult.

According to the existing provisions of law no vehicle can carry more than a nine-ton load, but there is no check on over loading in the state. The weighing machines installed at high cost by the government at different entry points of the state are out of order for the many years and wherever these are in working conditions, are not put to use by the officers posted on the barriers. No officers bother to repair these machines. In the absence of proper checks over 90 percent of the trucks have been carrying goods more than the prescribed limit, resulting in the destruction of roads, culverts and bridges on the highways.

The cement plants set up in Bilaspur and Solan districts of the state have further aggravated the situation. There is no check on the over loading of trucks carrying cement and clinker from factories. Besides, resulting in large-scale pollution in the region, these trucks have also caused heavy damage to internal link roads used to avoid the sales tax barriers.

The official sources said that over 10000 trucks and dumpers carrying cement and clinker of Gujrat Ambuja Cement Plant, Darlaghat, ACC Cement Plant Barmana and vehicles belonging to various power project companies use the national and state highways daily. Most of these trucks carry load between ten to fourteen tons openly violating the provisions of Motor Vehicle Act. Whatever tax these vehicles pay to the state government is quite nominal as compared to the loss being caused to the state roads.

Because of excessive use of road by these cement-loaded trucks, the Kiratpur- Manali National Highway, between Bilaspur and Kiratpur has become prone to land slides and soil erosion. It is on record that over two dozen small and big culverts have been badly damaged by over loaded trucks. During past rainy seasons the highway remained closed for days together as long portion of the highway have developed major cracks and number of culverts were damaged. The total loss caused to the highway in the state has been estimated over 250 crore.

Meanwhile the State Transport Authorities and Traffic police who are the major law enforcing agencies in the state have failed to fulfill their duties. Inaction on the part of these authorities has further worsened the situation and heavy vehicles are openly violating the norms. Official figures reveal that out of one hundred traffic challans filed by these authorities in
various courts of law in the state, only three percent pertains to offence of over loading while the ninety seven percent are of the other offences. The posting in the traffic police has proved a gold mine for the corrupt police officers and wide spread corruption in traffic police is also attributed one of the reasons, which has encouraged the defaulters.

The Maharastra and Karnatka are the two states in country, where there is blanket ban on the entry of over loaded trucks. In these states no truck can carry more than nine ton of load. If any over loaded vehicle is detected a fine of rupees 5000 minimum is imposed. All interstate barriers are equipped with latest weighing machines and it is mandatory for every vehicle to pass through these machines. An officer of the rank of District Transport Officer mans all such interstate barriers.

Therefore, the condition of roads is much better in these two states as compared to other states. If Himachal also enacts the same laws, the situation can be improved here also and state could save crore of rupees being spent on the repair of roads year after year.

At present the state government spends over 1000 crore every year on the re surfacing and repair of its national and state highways. There has been manifold increase in the number of vehicles after the commissioning of two cement plants, execution of power projects and other construction activities but no efforts have been made to widen its roads. The accident rate on the national and state highways has also gone up. The state should come out with new legislation without any further delay.

Photo: One of the portion of national Highway 21 ( Pathankot-Mandi) where road has virtually turned into Nullaha as the same is used by heavy vehicles daily carrying loads more than the prescribed limits. This photographs was taken near Kotla by Ravinder Sood.