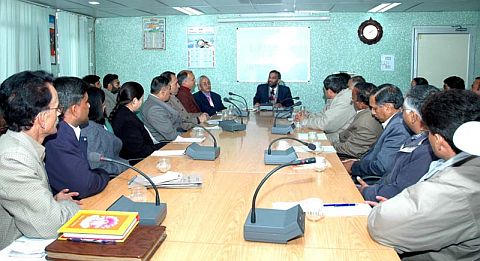 Shimla: New Director of Information and Public Relations Department (DIPR), J.R.Katwal, today called upon a meeting of officers of DIPR and asked the department to work with renewed zeal and dedication for highlighting the policies and programmes of the Government in order to reach the masses. He also insisted upon the need for strengthening of the department by way of renewed skills in the world of automation and globalization.

He also stressed upon the need to brush-up with new technologies as to keep pace with the time which is a requirement of the hour. Further he said that it also becomes our prime duty to be sensitive as well as responsive towards our duty, which should be discharged promptly in public interest and keep people aware of the developmental activities and other proposal taking place for the welfare of the people of the State.

Further, today a Spokesman of the State Government said that Himachal Diary, a production of Information and Public Relations Department would be telecast on National Channel of Doordarshan at 7.15 PM on 1st, 3rd and 5th Sundays of the month. The programme was not being telecasted earlier due to the Code of Conduct during elections for Himachal Pradesh Assembly Elections.