Jawalamukhi nestled in the sylvan surroundings of the Kangra valley in Himachal Pradesh, the Pong Dam wet land has emerged as a major habitat for migratory birds. Some 15000 to 20,000 birds belonging to as many as 54 species visit Pong Dam lake every year. This water reservoir was created in 1960 along with the construction of the dam. It is the only place in India after Bharatpur Sanctuary, where the rare red-necked crane has been sighted. 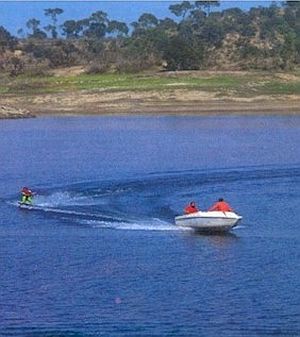 The state government has renamed the Pong Dam reservoir in honour of the great hero, Maharana Partap (1572-97). The man-made reservoir of the dam is 42 km in length and 2 km in widths on the Beas. The wetland also supports other kinds of wild life, including the barking deer wild bear, sambar, foxes and a variety of reptiles. The lake attracts thousands of birds annually. Prior to the construction of dam the number of species found in the area was less. However, the bird diversity in the reason was noted by a British Police officer as early in 1920 when he put the number of birdsâ€™ species in the vicinity at 27. The information left by him finally led to the marking of the region as protected area.

The water body occupies area of at least 18 hectares and expands upto 30,000 hectares and at the time of maximum flooding – an area of roughly 20,000 hectares with a radius of 5 km. The lake contains one major permanent island and several others are intermittently connected to the shore. The surrounding hill sides supports some deciduous and pine forests in which migratory birds can be seen on trees.

1985 survey recorded about 10,000 ducks near the southern shore of the lake and several thousands others near the Gaj Khad mouth of the reservoir. Under the social forestry program of the government, a large number of the eucalyptus1trees have been grown in the area. Wildlife experts have made a number of proposals for the development of this area into a world sanctuary. These include the creation of permanent shallow water area where reed beds and other perineal aquation vegetation will be develop to attract additional birds species and the planting of trees on the main island for the nestling sites.

In the wet land, the migratory birds are affected by the villagers to use the draw down area for the cultivation and the reservoir for the fishing. The reservoir displaced about 95 villages and the resident were compensated, yet most of them still reside in the fringe areas and cultivate the draw down areas when the waterline recedes. The purposed 5 km buffer zone area has about 125 villages which comprises of a population of more than 50 thousand people.

Regular winter migratory bird surveys have been conduct here since 1995. This has resulted in the accumulation of annual data for waterfowl at the reservoir. Some semi-structured interviews indicated the attitude of the villagers towards the wetland. Most of them did not know of the existence of a protected area in their vicinity. The fishermen and those who cultivate the draw down area, however, know about the bird sanctuary because the wildlife guards have told them not to harm the birds. The cultivation disturbs the mud flats and other waterbed habitats during the winter season. In the past five years, there has been an increase in reports of the severity of crop damage by the waterfowl, mainly by the bar headed geese and brahminy ducks. Secondly, fishing done by nets often causes obstruction to the diving ducks. Though poaching is not a severe threat, a few cases have been detected by the sanctuary protection staff.