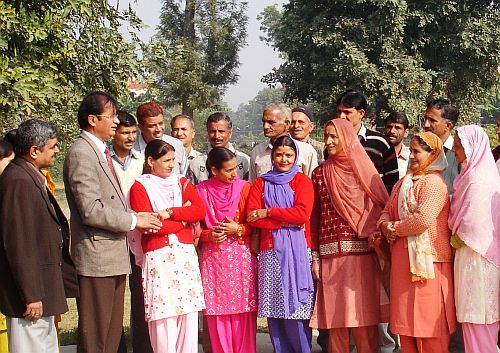 Mrs Amro president of the Shiva MPCS of Dehraparol of Hamirpur said that the trainees were imparted intensive training on breed -improvement, scientific feeding to dairy animals, shelter management and were also shown different breeds of cattle and buffaloes and interactions with the farmers were arranged by the training organizers that has been rated highly effective by the group.

While interacting with the 11 women members of the Shiva MPCS of Dehraparol of Hamirpur District Dr. Dalip K. Gosain, Head, KVK and DTC found that the 50 members of this society could procure each day 50 liters of milk. He further found that in this group of 23 total trainees 5 dairy farmers were from the Badon MPCS collecting only 7 liters milk per day as the Society has just begun and other MPCS with 5 members of Kharsal village in Mandi district functional since one year could procure only 20 liters of milk each day.

Dr. Gosain said that although the milk procurement from the Badon and Kharsal MPCs was very low and the vehicle for milk collection has to run for 45 kms. from three different points in Badon but this must be continued for more months so that the present members of the MPCs were encouraged and could motivate others for pouring more milk in these three societies.

Mrs. Promila Devi, Secretary of Shiva MPCS of Dehraparol of Hamirpur said that the members of her Dairy Cooperative Society were interested to have electronic milk testing machine so to avoid any error in estimation of Fat and SNF.

Mr. Khem chand, Incharge Chilling Station, Bhambla located on the border of Mandi and Hamirpur Districts said that their station was receiving around 250 liters of milk from 14 Cooperative Societies and the milk procurement was improving.

While concluding the programme Dr. Gosain urged more farm families to be part of MPCS to benefit both the Dairy Federation and dairy farm families.