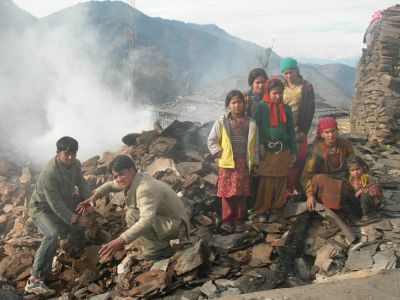 Shimla: Rendered homeless in mid winter, 53 houses in an idyllic village of Banjar valley in Kullu were burnt down as a raging inferno consumed the habitation in the dead of night.

After just having concluded the poll process in Kullu district, magistrate Abhishek Jain was woken in wee hours to be informed that a village, two and a half hours drive from his official residence was on fire.

The fire was noticed at about 2.30 a.m in the night but the villagers managed to vacate the place safely.

Jain, supervising relief at Mohani village in Banjar Valley said, â€œ46 houses have been completely burnt down and 7 others are partially burnt.There is no loss to human life and only one cattle head perished in the fire.â€

The district machinery had had a hard day conducting the elections through the day and late evening when news of the fire got to the district headquarters very early in the next day, said Jain.

Fire tenders and rescue staff was rushed to the site, which is about 3 hours drive from the district headquarters, he added. 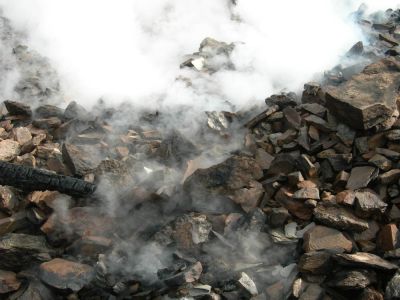 Cause of the fire could not be known and the government has rushed in rations, blankets, makeshift shelters, tents and other essential items, said the magistrate.

Most of the affected families have move in with relatives and neighbours who houses survived the inferno and the government would soon take a decision of sanctioning timber for house construction, he said.

Immediate compensation of Rs 10,000 was released to the families who have been left with no house, said Jain.

The government has assessed the fire loss at Rs 6 crore.

Governor VS Kokje and chief minister Virbhadra Singh have expressed grief over the incident.