Shimla: With cold weather and snow having hit the electioneering in Himachal, political leaders have devised innovative methods of beating the weather gods and managing to hold in absentia rallyâ€™s by simply speaking to the electorate thorough mobile phones.

Schedule of holding Sonia Gandhiâ€™s rallyâ€™s at Mandi and Nupur were abandoned as the heavy overcast conditions did not permit helicopter sorties. BJP president who was scheduled to address election gatherings at Chopal and Shillai had to abandon his program, though he did reach Shimla.

However, the BJP spin doctors adopted an innovative technique and Rajnath was able to conduct the rally in distant Shillai constituency of Sirmaur district by speaking through a mobile phone that was placed over the mike at the election meeting venue.

Satpal Jain, BJP incharge for Himachal informed that bad weather conditions prevented any helicopter sorties to Chopal and Shillai where the BJP president was scheduled to hold election meetings.

â€œHeavy snowfall in Chopal did hinder gathering of people there but there was a large gathering waiting at Shillai to hear Rajnath Singh. The best we could do was to have the BJP president speak over a mobile phone that was placed over the public address system at the rally venue and the party presidentsâ€™ message did get conveyed,â€ said Jain in the presence of Rajnath Singh. 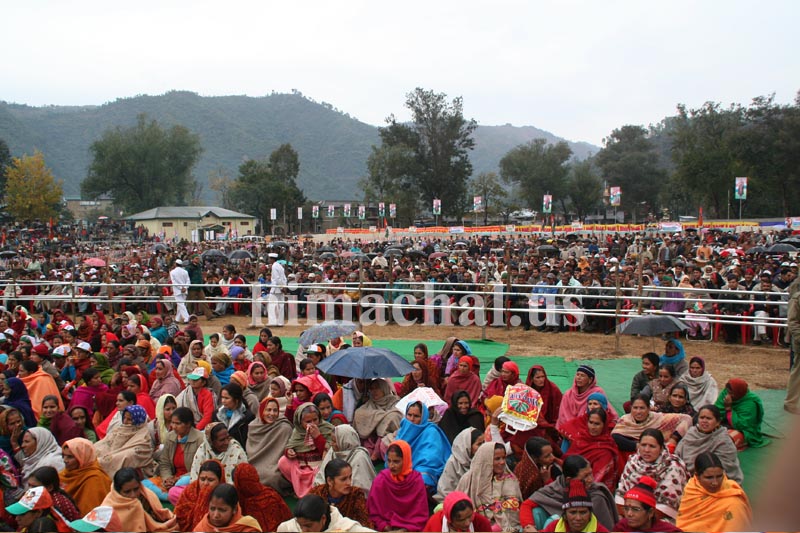 Supporters of Sonia Gandhi at Mandi and Nurpur were a disappointed lot for there was no mobile phone rally for them as the congress presidentâ€™s program stood cancelled because of the bad weather. On hearing that the party president was not coming, the venue was soon deserted.

Nevertheless it was congress campaigner Satpal Maharaj who took the lead in conducting such phone rally in the state. Unable to make it to Nagwain in Mandi district, on Monday, Satpal Maharaj addressed the gathering thorough a mobile phone, by sitting in the Delhi airport lounge itself.

Yash Razz, who attended the Nagwain rally said, â€œit was a funny election experience seeing a person hold a mobile phone over the mike to hear the main speaker address the rally. It was only later that we learnâ€™t that Satpal Maharaj was speaking from Delhi,â€ he added.