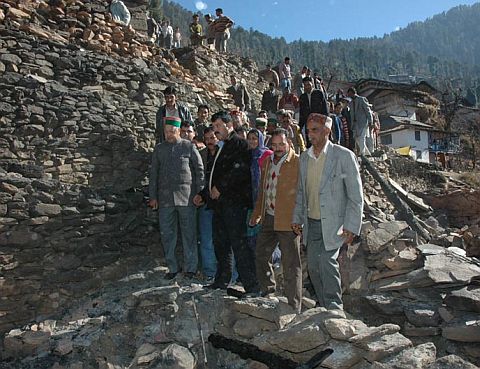 Shimla: Chief Minister Virbhadra Singh visited Mohani village of Kullu district on Wednesday to share the grief of the victims of devastating fire which raged dozens of houses to ashes on the midnight of 19th December, 2007. He showed concern to the affected families and ensured that State government will do the best to rehabilitate the victims on priority.

CM was thankful to god for not resulting in any life loss in the tragedy. On the other hand he also thanked the NGOs and other local organizations who gave their active services to the people in carrying out the relief and rehabilitation activities.

He announced Rs. 30 lakh out of Chief Minister’s Relief Fund in addition to the relief applicable under the revised Relief Manual of the state to speed up the relief and rehabilitation measures for suitable rehabilitation of the affected families. He also handed over the remaining amount of Rs. 25,02,000 to the Sub- Divisional Magistrate of the area due under the relief provisions for further disbursement to the fire victims. He also announced 20 GI sheets to every affected family for their new homes besides assured moving a special appeal before the Hon’ble High Court to vacate the stay on TD rights restoration of the stake-holders of the state so that people affected due to natural calamity and fire etc. were provided timber wood for reconstruction of their houses. He also announced six months free ration to the affected families.

He also handed over the cash and other material donations to the affected on behalf of the NGOs, local bodies and various individuals of the areas.

He also appealed the people to donate towards Chief Minister’s Relief Fund in order to offer help all over the state for relief and rehablitation. 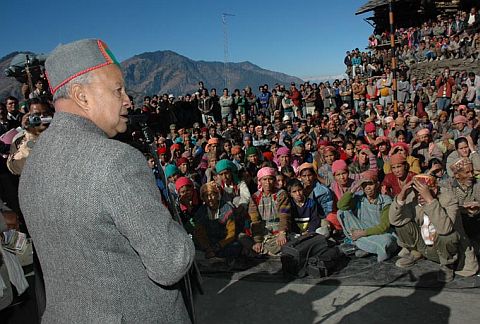 Local MLA, Ishwar Dass, urged the CM to sanction liberal finances to the fire victims besides TD, GI sheets, rations and others.