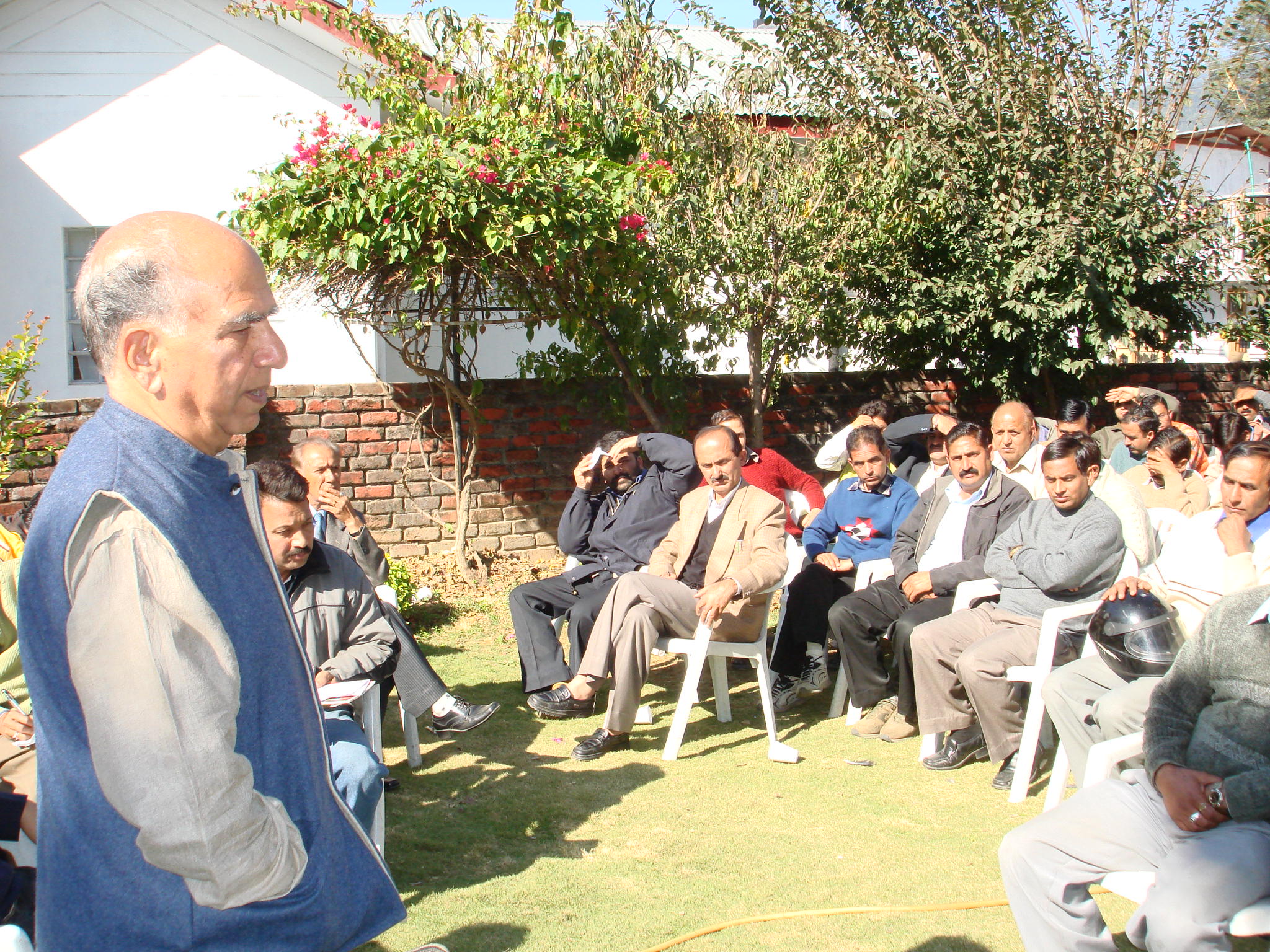 PALAMPUR – Mr. Shanta Kumar senior BJP leader and former Chief Minister today said that if the BJP was voted to power after the assembly elections it would imitate major steps for the welfare of the stat government employees. He said BJP government would get rid employees from the problems of frequent transfers as it would come out with a transparent transfer policy for the employees in the state which would be acceptable to both government and employees. Shanta Kumar who was addressing the state government employees at his residence this morning regretted that during congress regime the transfer of employees had become a industry and number of congress leaders were minting money out of it. He said he had received reports that there was middlemen in the congress government who were first getting employees transferred and later get their transfer canceled by taking huge amounts.

Earlier hundreds of Non Gazetted Employees (NGOs) of the state government t marched to the residence of senior BJP leader and former Chief Minister, Shanta Kumar and pledged their support to BJP in the coming assembly elections. These leaders said that they wanted neat and clean administration in the state after assembly elections and Mr. Shanta Kumar could only provide that, therefore, they had extended their support to him.

Mr. Subhash Sharma, NGO leader while addressing the employees in the lawns of Yamni Hotel said that Shanta Kumar ruled the state twice and he took historical decisions for the welfare of the employees. The constitution of Joint Action Committed of employees was made at the behest of Mr. Shanta Kumar when he was Chief Minister, who later also recognized it and it was also involved in all major policy decisions taken for the betterment of employees by the government in the state. Besides, when he took over the reins of the state in 1990, he vacated the victimization of over eighteen thousand employees who had been facing number of cases in various courts and disciplinary action instituted by congress government.

Addressing the employees Mr. V.K. Kaul President H.P. Karmchari Mahasang said that during congress regime of past five years, over three lakh employees were shifted without assigning any specific reason and later only those transfer were canceled where money was passed to the congress leaders or employees leaders close the VirBhadara Singh. Criticizing the Lakshmi Singh Machan, self styled president of HP NGOs federation, he said he had ditched the employees of the state in past five years, he had failed to watch the interest of the employees and had become mouth piece of Vir Bhadara Singh.

He said it was imminent that BJP in the state would assume power after the assembly elections; therefore, the state government employees had come open in the support the BJP. Appreciating Shanta Kumar he said he was great visionary, policy maker and thinker who could provide best administration in the state, therefore, it was needed that every one should support him. NGO leaders from Shimla, Chamba, Bilaspur, Mandi and Kulu were also present.