BJP sure to win the elections, says Dhumal. 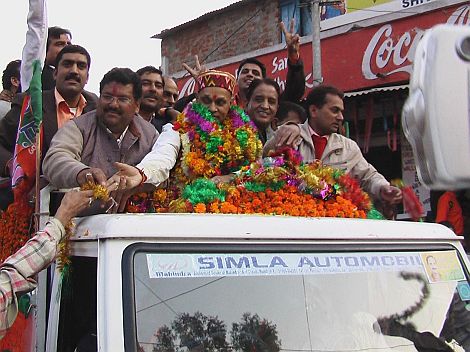 Hamirpur: Senior BJP leader and party’s chief ministerial candidate for Himachal Pradesh, Prem Kumar Dhumal today hit out at the Congress leader and chief minister, Vir Bhadra Singh for saying that with the naming of Dhumal, his task had become easier. He told the chief minister to wait till December 28 th, the situation would become crystal clear. He said this while talking to My Himachal today.

Dhumal said that the Congress was raising non issues and these would have no effect on the wearing of elections in the state. This gimmick of Congress would not work this time and prove counterproductive for the Congress.

He said that the party was sure about BJP’s victory in the December 19 poll in the state. The party will sweep the elections and form its government, he said. It was his first visit to state after being asked by the party to head the organization in wake of the state assembly elections.

Earlier, Dhumal was brought to his home district of Hamirpur in a big procession by the party leaders and workers from Una, where he reached this morning. People garlanded him and showered flower petals on him. They also raised pro Dhumal and pro-BJP slogans. 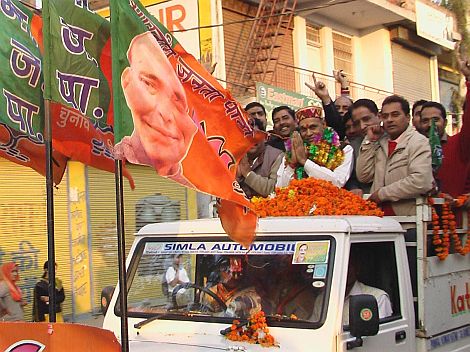 He said that people of the state were upset with the Congress for its anti people stance and would reject the Congress to install the government of BJP. He claimed that the BJP was a party of poor and farmers and that was why party gave him chance to lead it during the elections.

The BJP leader said that corruption and the development would be the two major election planks of the party this time. The Congress had stooped too low that it was hitting the BJP leaders below the belt. This gimmick of Congress would not yield favorable results and the downfall of Congress was imminent this time.The former chief minister blasted the Congress and its leaders for misleading the people on development and its related issues. Development was haywire during the Congress regime as the state was staved off funds. Whatever funds came from center those were misused by the ministers, MLA’s and officers having leanings with the Congress. Moreover, the heavy top administration was also another reason of mess that prevailed in the state during the Congress regime.