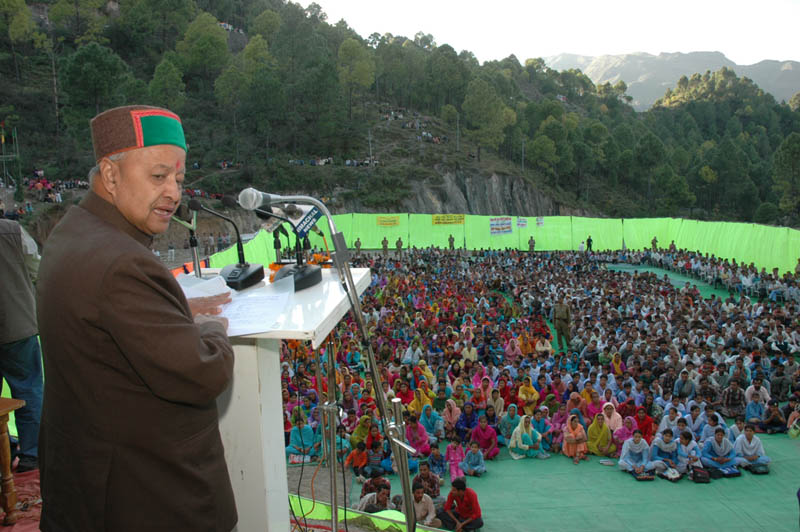 National Rural Employment Guarantee Act to be implemented in all the remaining eight districts of the State from October 10, this year while four districts Sirmour, Chamba, Mandi and Kangra had already been covered under the national ambitious programme.

This was stated by Shri Virbhadra Singh, Chief Minister, while addressing a public meeting at Shillai, the remote area of district Sirmour, after he laid the foundation stone of newly sanctioned college building complex estimated to cost Rs. 7.5 crore and dedication of helipad constructed at a cost of Rs. 15 lakh to the people of the area.

Chief Minister said that people of the State were indebted to the UPA government which had envisioned the ambitious programme to ensure minimum of 100 days guaranteed employment to the rural people near to their homes. He said that the NREGA had been announced to be implemented from next financial year, while the state would be implementing the programme from October 10,2007, so that the benefits were delivered to the targetted groups. He said that it was a tribute to the Father of the nation, Mahatma Gandhi who dreamt “Gram Swaraj”.

Shri Virbhadra Singh said that State Government had decided to double the Public Distribution ration quota to all the categories of ration card holders from 1st October, onwards. He said that Antyodaya, BPL, IRDP and other general category of ration card holders would now be eligible to draw double quota of the subsidized ration from fair price shops. He said that H.P. was the first State in the country which had made such provision to check the price rise in essential commodities in an effective way.

Shri Virbhadra Singh said creating best educational infrastructure in rural area had been the policy of the State Government. He said that so far 72 degree colleges had been made functional, majority of which were in rural areas. He said that 22 new Government degree colleges had been opened in the remote, tribal and difficult areas. With this programme government was committed to make Himachal Pradesh a ” Knowledge Hub” where private participation would be encouraged.

Another function of CM was organized at Kafota in Shillai assembly constituency.

â€˜One ITI would be opened at Kaffota, Sub-Tehsil upgraded to full-fledged tehsil of Kamrau to facilitate the people of the area with revenue and industrial training facilities to the local youth of the areaâ€™, this was stated by Shri Virbhadra Singh, Chief Minister while addressing a mammoth public meeting at Kaffota after he dedicated Milk Chilling Plant constructed at a cost of Rs. 85 lakh to the farmers of the area and laid foundation stone of Science Block of Govt. Senior Secondary School, Kaffota at an estimated cost of Rs. 50 lakh, today.

He said that the Milch Chilling Plant of Kaffota would generate annual income of Rs. 100 crore to the local people and benefit 2500 milk producing families which had formed 20 cooperative societies in the area. He said that rural women would be the main beneficiaries under the programme.

Later, Chief Minister also dedicated PWD Rest House at Jakhna completed at a cost of Rs. 50 lakh and the foundation-stone of the Rohgvi-Piabhar-Mashli Water supply scheme to be constructed at a cost of Rs. 2.20 crore to benefit 19 villages of the area.