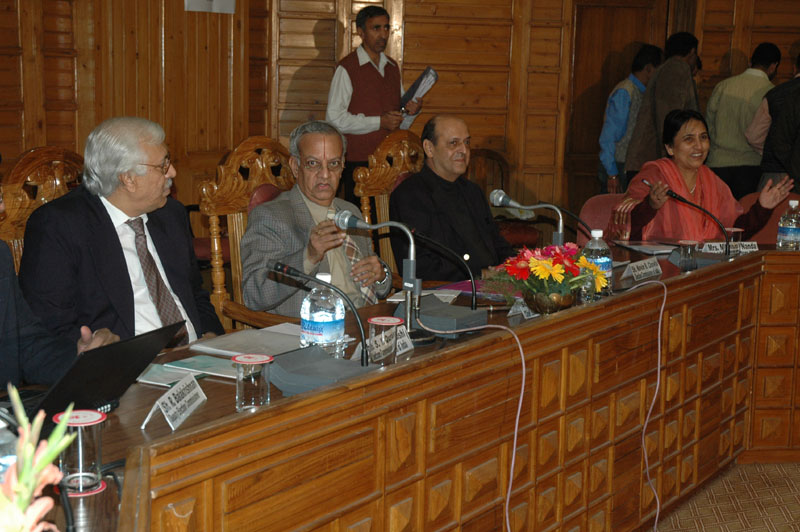 Shimla: The congress was isolated on the issue of demanding rescheduling of poll dates where as the other parties which included BJP, BSP, CPI (M) and CPI endorsed the Election Commission stance of completing the process by year end, two months before the term of the existing state assembly expires.

Headed by the chief election commissioner, the three member commission arrived late in the afternoon and immediately got about its business of hearing out the views of political parties and also reviewed preparations for the ensuing elections.

Led by forest minister Ram Lal Thakur and Asha Kumari, Mukesh Agnihotri and Harsh Vardhan, all MLAs the congress team let the Commission know that an early winter onset would effect the polling and there could be a low turn out on poll day. The congress also said that by holding the elections early, many young people would become eligible voters for a election in Feburary would stand disenfranchised. Besides, Thakur said that most schools would be undergoing their annual examinations in December and since the elections are mostly conducted in schools as well as election staff is deployed from the education department, they would not be available in an early poll.

The congress team also pointed out that there would be two set of assemblies in existence without the previous one being dissolved, whose term only expires in March, 08. The commission was also told that the 3 tribal MLAs who had sought their elections with the rest of the assembly seats stand to loose a nine month tenure if their election is held in November, as scheduled by the commission.

A five-member BJP delegation, led by general secretary K R Balanahta and Rajiv Bindal said that their party did not have any objections with the poll schedule announced by the commission. However, they asked the Commission to enforce the code of conduct strictly. Referring to the misuse of helicopter by state Chief Minister Virbhadra Singh, they said he was still using it despite the moral code of conduct that had come into force on October 10 evening.

The BJP leaders said they told the commission that there was no constitutional crises following the early announcement of polls and the Congress was only raking up the issue to get the elections rescheduled. The BJP also said that the congress could go ahead and hold a ‘lame duck’ session if they choose to convene the house and the winning party could assume office after the expiry of the term of the present government.

The BSP, led by Vijay Singh Mankotia also welcomed the EC’s decision on poll schedule for the state and said three times in the past assembly and parliamentary elections had been held during the winters. Any change in the poll dates would provide an opportunity to the state government to take retaliatory action against those government employees who had come out against it after the announcement of the polls, it said.

Welcoming the EC’s decision to hold assembly elections in two phases in the state, a CPI delegation comprising state committee members Rajiv Rai and R L Dogra said their parity had no problem with the poll dates. Referring to their submission to the EC, they said their objection was only related to the fact the electorate should be allowed to exercise their right to franchise in absence of the voter cards since the electoral rolls were not complete.

The EC should relax the norms and allow people to cast their votes on alternate documents like driving license and ration cards, they said. However, in case the elections are rescheduled, they should only be held in May and June neat year after imposing president’s rule in the state after March, fulfilling the demand of all parties for simultaneous polls in tribal and other assembly seats, the CPI leaders.

The CPI(M) led by state secretary Rakesh Singha also endorsed the commissions decision for holding an early poll. Holding of late elections in tribal areas was always influenced by the party that had formed the government in the state said Singha. The party wanted that all people who had not enrolled, be given a chance to get themselves registered so that they could participate in the democratic process.