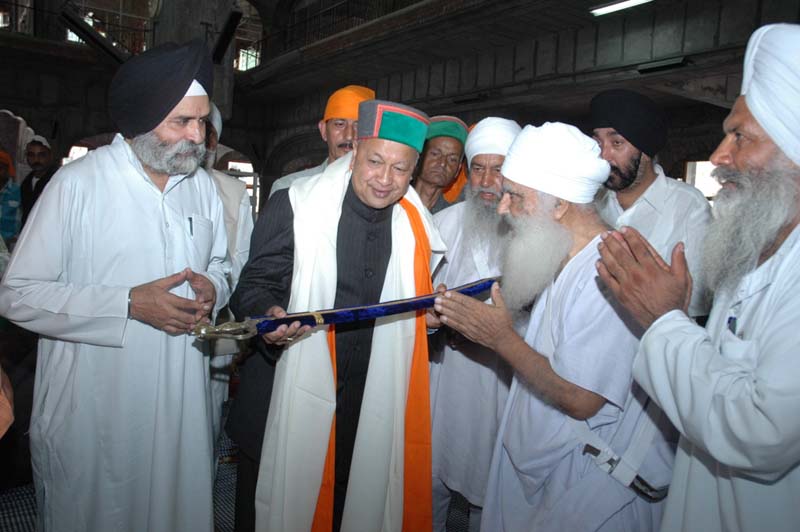 While speaking on the occasion of inaugural ceremony of the first session of newly opened Akal College of Engineering and Technology run by Kalgidhar Trust, at Baru Sahib in Rajgarh Sub-Division of Sirmaur district today, Chief Minister Mr Virbhadra Singh ragged opposition of the state for its â€˜negative attitudeâ€™.

Chief Minister said that he is charged by the opposition of dreaming. He admitted that he dreams only for the development of the state and to the limits only which could be achieved by the government. He commented that he never dreamed to kill others â€˜as some of my political friends dreamsâ€™, he commented.

State Government would promote technical and vocation education in a big way to equip students with professional skills which were globally recognized. Chief Minister made it clear that those persons who just want to run their â€˜business shopâ€™ in the name of quality education would not be allowed to open their shops in the state.

He said that his Government had adopted open door policy about the private participation in education sector and would welcome any professionally competent, experienced and financially viable parties to come to Himachal Pradesh and open centres of par excellence learning all over the State to make it ‘Knowledge Hub’ of the country. Chief Minister added that private players could play vital role in supplementing the endeavour of the State Government towards its quality education.

Chief Minister said that State had opened atleast one ITI and ITC in every assembly segment of the State to provide rural youth vocational trainings at their door steps. He said that a number of private technical schools, colleges and centers of par excellence learning had also been opened in different parts of the State for dispersal of the vocational education. He said that encouraging response was coming forth from the competent private players in the field.

Chief Minister said that State was fully literate, electrified, piped water supply available to the villages and per capita income of Himachal was much above many States in the country. He said that entire identified hydel potential of the State was being exploited by according top priority. He said that global tenders had been floated for the allotment of mega hydel projects with complete transparency and open competition basis. He announced that a 33 KV Sub-Station would also be opened in the Kheri area to solve the voltage problem.

He said that hospital staff needed to be more care taking besides carrying the medication and emotional support to the patients to help them overcome their ailments more speedily and every charitable and state health institution needed to follow the same system.

Singh assured all possible help to the Management in making all their charitable endeavors successful. Earlier, Chief Minister visited Gurudwara to pay his obeisance. He was presented Siropa by the Gurudwara Management Committee. He also visited the Akal Charitable Hospital.

G.R. Musafir, Speaker, H.P. Vidhan Sabha presided over the function and thanked CM for his added attention towards the developmental needs of Sirmaur. He said that Rajgarh, the Peach valley of the State, had gained prosperity at international- level.